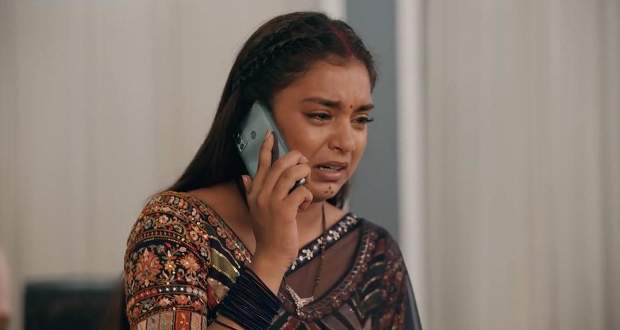 Today's Imlie 13th May 2022 episode starts with Imlie asking Madhav and the donor guy to put their seatbelts on and starts hitting the car ahead of her.

The car owner argues with Imlie but she demands him to clear the traffic as she needs to go to the hospital and will reach there at any cost.

Upon reaching the hospital, Imlie tells the reception but gets informed that the blood has already been arranged.

Meanwhile, Jyoti gives the blood to the doctor who goes inside the room and injects it into Aryan.

Flashback shows, Jyoti bribing the warden to give her the last packet of O-negative blood.

Imlie gets happy to see that Aryan's treatment has started and thanks Jyoti while Narmada suddenly slaps her.

Arpita and Sundar rush to Imlie while Narmada warns them to stay away and takes Imlie from there.

In a state of shock, Imlie asks Narmada if she is angry at her while Narmada tells her that she made a mistake identifying her.

Narmada accuses her of breaking the Tripathi family and states that she used Aditya as a stepping stone in life.

Narmada says that Imlie is doing the same with Aryan and tells her that she is the reason for every attack that has happened on Aryan.

Being influenced by her words, Imlie starts sobbing loudly while Narmada continues that she left Aryan at the hospital for work and can sacrifice him for a better husband.

Narmada warns Imlie to not come near Aryan until he wakes up and leaves while Imlie falls on the floor sobbing loudly.

Later, Imlie leaves the hospital while Aryan wakes up with the family surrounding him.

Aryan asks about Imlie and gets confused seeing the cold expression on Narmada's face.

Aryan is about to leave looking for Imlie but Narmada stops him and starts bad-mouthing Imlie.

He stops her saying that Imlie is not at fault and that he knows who influenced her against Imlie while glaring at Neela and Jyoti.

Aryan again tries to leave while Narmada stops him saying that Imlie can leave him anytime just as she left her first husband.

To download Imli all episodes or watch Imlie today's (13 May 2022) latest full episode, go to hotstar.com