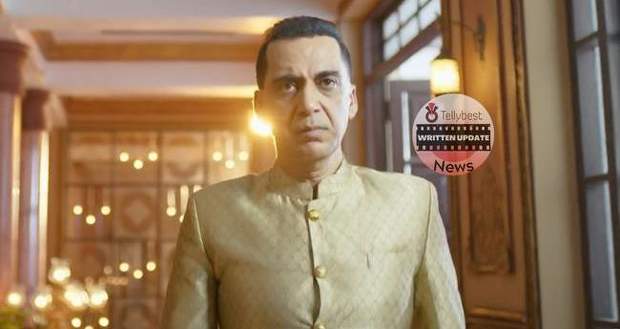 Today's Imlie 13th November 2022 episode starts with Atharva rushing inside to see Imlie trying to get out of the fire but being stuck.

Imlie tells him to not come near the fire while he throws a blanket over the flames and goes to Imlie.

However, before the two can leave, another fire breaks out and Atharva rushes to get out of the studio with Imlie.

Imlie sees Atharva's instruments burning and rushes to save them while Atharva also starts taking the instruments.

A window panel is about to fall on Imlie and Atharva saves her while they share an eye lock.

Later, the fire brigade saves them while Imlie sits opposite Atharva and tells him to talk out his feelings as keeping them inside will be dangerous.

Atharva thanks her for saving his instruments and asks her how she understood him in two days when his whole family still doesn't understand his love for music.

Imlie tells him that they should return home while Atharva thinks to tell her the truth.

However, as Imlie stands up, she stumbles and Atharva takes her in his hands.

On the other hand, Jatin threatens Cheeni once again and shows her the photos that he took of them.

Instead of being threatened, Cheeni laughs and tells him that he can show the photo to anyone as Atharva is soon going to separate from Imlie.

Meanwhile, Atharva enters the Rana house with Imlie in his hands while the whole family rushes to check up on them.

Atharva blames Rudra as he disconnected the electricity while Shivani and Divya start taunting and blaming Imlie.

However, Atharva stands up for Imlie and tells them that they need to change their way of seeing things.

Imlie further calls her family and informs them that she is fine as Atharva saved her.

Cheeni learns that Imlie has left with Atharva for the Rana house and thinks of a plan.

Later, Atharva gets a call from Cheeni who tells him to meet her outside the house.

Atharva gets shocked as he rushes to see her.

However, Atharva starts arguing with Cheeni for leaving him alone with Imlie at the studio in the fire and not even calling him later to ask if he is okay.

Atharva tells her that she should have been there for him but it was Imlie who stayed back and helped him.

Cheeni however turns the tables by saying that she was the one who had called the fire brigade and left because she does not have the right to wait for him.

Atharva starts feeling guilty and apologizes to Cheeni while Cheeni states that she just fears that Imlie will take him from her too.

Atharva tells Cheeni that he is not doubting her but states that her words for Imlie and Imlie's actions do not match.

Lastly, Atharva tells Cheeni that she should talk to Imlie and realize if they are just having a misunderstanding or not.

© Copyright tellybest.com, 2022, 2023. All Rights Reserved. Unauthorized use and/or duplication of any material from tellybest.com without written permission is strictly prohibited.
Cached Saved on: Monday 21st of November 2022 01:37:12 AMCached Disp on: Thursday 1st of December 2022 02:55:23 AM