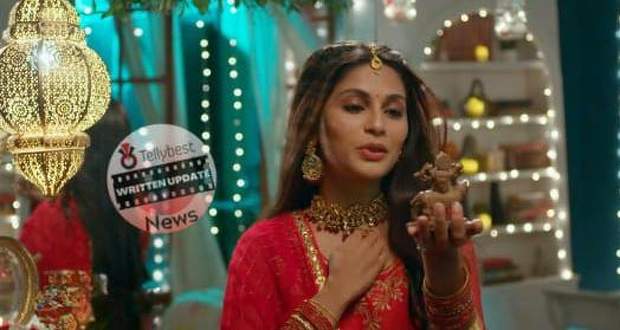 Today's Imlie 13th October 2022 episode starts with Imlie confessing her feelings towards their relationship to Atharva.

Imlie tells Atharva that they will learn about each other’s interests like she will read Bhagwat Geeta to him and listen to his English songs.

When Imlie turns around, Atharva is gone and she blames herself for speaking too much.

At the same time, Arpita call Imlie and Atharva comes out from behind the tree and feels ashamed to face her.

On the other hand, Cheeni’s dupatta flies at Atharva's feet when she is getting her photos clicked.

Both Atharva and Cheeni bend to pick up the dupatta while he gets mesmerised by her beauty.

Meanwhile, she questions his weird behaviour and asks him if he wants to say something.

Atharva is about to confess his love to Cheeni but Kia and Akash interrupt them.

On the other hand, Rudra worries about Atharva confessing his love to Cheeni as she is a selfish woman.

Kia taunts Cheeni for taking farewell from Imlie’s house and stops her from going towards Atharva.

Cheeni accuses Kia of hiding something and she gets scared and runs away.

On the other hand, Imlie talks with Jatin requesting him to take care of Cheeni after marriage.

Meanwhile, Jatin touches Anu’s feet and she taunts him for knowing his deserving place.

Later, Arpita and Rupi get emotional as Cheeni and Imlie are leaving them.

They tease Imlie while she recalls her heartfelt confession to Atharva.

Meanwhile, Akash takes Atharva to the DJ area and he fights with Akash for interrupting his confession and says I love you while a nearby mike is on.

However, everyone misunderstands that he is confessing his love to Imlie and teases her.

At the same time, Kia switches off the mike and Atharva thinks that he needs to confess his love for Cheeni to Kia and Aakash.

Cheeni is standing at the window and hears Atharva's confession and recalls his flirting and weird actions with her.

Meanwhile, Kia tells Atharva that Cheeni does not have any feelings towards him as she agreed to the marriage with Jatin.

They persuade him to not confess his love to Cheeni as it will break her marriage.

At the same time, Imlie takes Cheeni to the mandap and she tells Imlie that she can keep her golden fate to herself because Cheeni has diamonds in her fate.

Cheeni declares she will write her own fate, unlike Imlie whose fate is written by Sita Maiya.

Later, Cheeni enters the hall and goes towards Atharva while Imlie is worried.

However, Atharva passes beside Cheeni while she watches him shocked.

Afterwards, Cheeni and Jatin stand with garland in their hands and she throws the garland into the fire.

Atharva's feet stop at the threshold of Rathore's house when Cheeni says she doesn't want to get married to Jatin.

© Copyright tellybest.com, 2022, 2023. All Rights Reserved. Unauthorized use and/or duplication of any material from tellybest.com without written permission is strictly prohibited.
Cached Saved on: Monday 21st of November 2022 03:17:01 PMCached Disp on: Thursday 1st of December 2022 11:28:22 AM