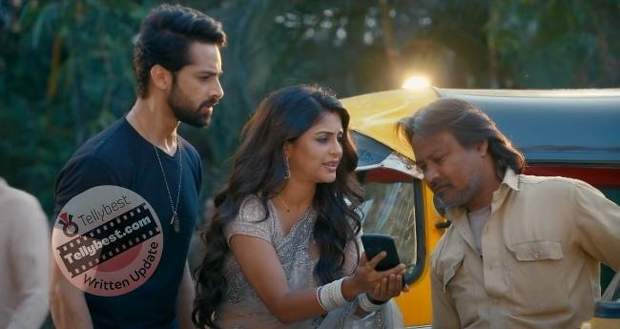 Today's Imlie 14th December 2022 episode starts with Imlie realizing that the bangles are fake and looking around for the real gold bangles while Atharva comes there and asks her why she looks worried.

Imlie tells Atharva about someone replacing the gold bangles with real ones while he says that they will investigate about it after the Havan as it will create drama otherwise.

Meanwhile, Anu is scolding Cheeni for accepting defeat and going to meet another prospective groom at a rich restaurant.

Cheeni laughs as she says that she has come to have fun since she has left Imlie with a new set of problems.

Flashback shows Cheeni sneaking into Imlie's room and exchanging the ancestral bangles with fake ones.

Back in the present, Devika tells the family about the hard times the family suffered and how the ancestral bangles are the witness of that.

Keya and Akash see Imlie's nervous expression and get curious as they all sit for the Havan.

Meanwhile, Chini gets angry when the receptionist tells her that there is no reservation under both her name or Abhishek Agnihotri's.

Just then, Abhishek comes there and tells Cheeni that they are going somewhere else.

At the Rana house, Keya sees Imlie's bangle and gets excited as she realizes that the bangles are back.

Cheeni gets upset as Abhishek brings her to a tea stall and states that they are just there for a meeting first and will decide later if they are on a date or not.

Meanwhile, at the Rana house, the family finds out that the bangle is fake and Imlie feels guilty.

Keya and Shivani start accusing Imlie while Atharva stands up for her saying that he knew about the bangles but had thought to talk about it after the Havan.

He says that he will bring back the bangles and takes Imlie away from there saying that the thief must've tried to sell the bangles.

On the other hand, Cheeni thinks of Abhishek as a cheap person but tries to calm herself thinking Imlie must have been suffering the family's taunts.

Meanwhile, Atharva and Imlie come to the thief market and look around for a jewellery shop while they notice a guy with bangles.

Atharva asks for the price and they settle for 2 lakhs but seeing Atharva agree so easily, they raise it to 5 lakhs.

Further, they misbehave with Imlie which angers Atharva.