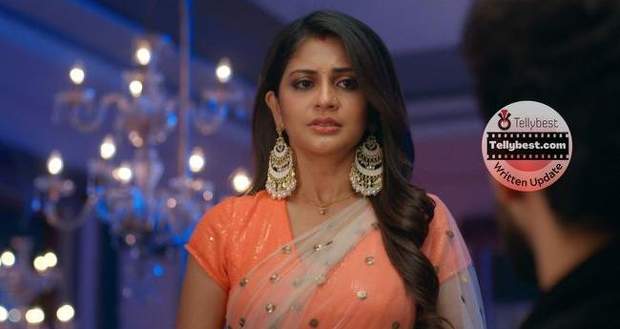 Cheeni looks at them while thinking that soon the family scene will turn into an action scene.

Just then, many goons come there with guns and fire as they hold all the customers and the shop employees, hostage while half the goons go to the locker room.

Back at the Rana house, Atharva thinks to tell Imlie about Cheeni's message when he and the rest of the family members see the news about the hijacking news on television.

Atharva rushes to the jewelry stop telling the family that he has to save his mother and his wife while Rudra goes to call the commissioner.

Back at the shop, Sundar tries to fight the goons but gets hit they them while Cheeni tells him to not interfere in their plan since they have a gun.

Further, Cheeni scolds the goons for trapping her inside the shop while the goon removes his mask revealing his face.

Cheeni gets scared as she realizes that the goons are not the ones she hired and that they are hijacked by real goons.

Atharva reaches the shop and tries to get inside but is stopped by the police while Rudra continues to communicate with the higher authorities.

At the shop, a child cries and Imlie manipulates the goon into letting her go to the kitchen to get something for the baby.

She also brings a snack for the head goons trying to manipulate him but he tells her to go and sit with the others.

Cheeni stands up and threatens the goons about her fiancee being a big shot but Imlie apologizes on her behalf and calms the goon.

Further, while the head goon is eating the sandwich, Imlie and Cheeni get shocked to see Atharva enter through the window.

While the goon goes to check the movement near the window, Atharva comes to Imlie through the back and tells her that he is going save them before hiding again.

The head goon asks who was it and manages to notice Atharva as he is trying to come near Imlie and points a gun at him.

The whole family except Cheeni also stand up sacrificing themselves for others while the goon gets annoyed.

However, before the goon can shoot anyone, he falls to the ground unconscious.

Imlie smiles seeing that her plan worked and Atharva takes over the other goon while locking the remaining goons in the pantry.

Imlie says that they have to escape before the goons from the locker room come out and start looking for an escape route.

However, before the hostages can escape through the back door, the main goons shoot and take them back inside.

The goons further demand to know who made Rana unconscious and Imlie comes forward saying that she is the one who did it followed by Atharva.

Cheeni angrily tells the couple to not bore them with their drama and tells the goons that it is Imlie who did everything while complaining that she doesn't want to die because of Imlie's hero complex.

Atharva tries to take the blame but Imlie tells him to speak the truth and not break her trust.

© Copyright tellybest.com, 2022, 2023. All Rights Reserved. Unauthorized use and/or duplication of any material from tellybest.com without written permission is strictly prohibited.
Cached Saved on: Wednesday 25th of January 2023 09:54:34 AMCached Disp on: Monday 6th of February 2023 04:41:37 AM