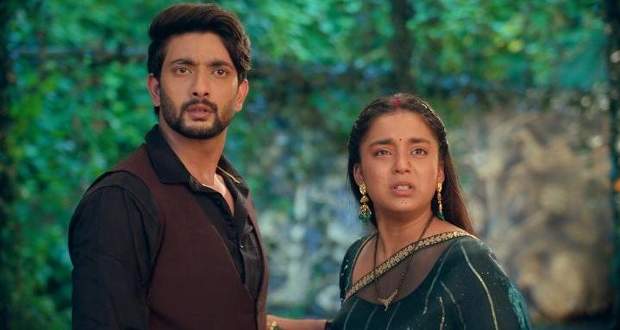 Today's Imlie 14th July 2022 episode starts with Imlie breaking into Malini’s house to see little Gudiya and gather evidence against Malini for not being a good mother.

As Aryan and Imlie stand in the baby’s room, Malini enters the room and Aryan starts shooting her with a camera.

She takes the camera out of Aryan’s hand and starts to shoot a video proving her innocence but Imlie tells her to stop acting.

Malini tells Imlie to leave her house and Imlie has to go.

After coming home, Imlie asks Aryan why did they leave the baby there when they know that Malini is not treating little Gudiya right.

Aryan tries to explain to her that no manner what kind of a mother Malini is, they can’t teach her to be good at parenting.

He asks Imlie to stop interfering in Malini’s problems and walks away from her.

In the office, Imlie seems lost and Aryan scolds her for not paying attention to work.

Imlie cries in front of him saying that nobody will love little Gudiya in Malini’s house.

Aryan takes Imlie’s hand and walks out of the office with her to drive to Malini’s house.

When Malini opens the door, Aryan warns her that as soon as they gather evidence, they will report her to the police.

Anu sees this and says that they don't care about the threats given by them and says she’ll counter-sue them.

Saying that she can do whatever she wants, Aryan gives a final warning to Anu and start leaving with Imlie.

While they’re leaving, the baby starts crying and Malini asks if Imlie wants to go inside to see the baby.

However, when Imlie starts to go inside, Malini tells her to apologise to her first, about everything in their past, but Imlie says no.

At that time, the nanny comes and tells them that the baby is crying a lot today, which tempts Imlie to go inside and Anu asks Imlie to apologise first, but Aryan stops her.

Ignoring Aryan’s request, Imlie apologises to Malini and Malini asks her to join her hands and then say sorry, to which Imlie agrees.

Imlie then goes inside to pick the baby up and swaddle her to calm her down.

She promises the baby that she will never differentiate between her and chiku.