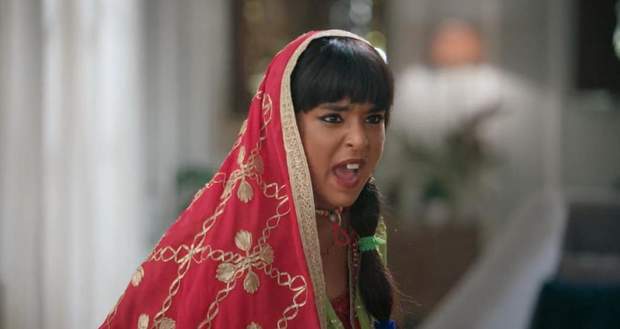 Today's Imlie 14th June 2022 episode starts with Jyoti asking Keri to serve her the food despite her fast.

Out of impulse, Keri calls out to Jyoti that today is her fast, then how can she eat at which Jyoti asks her how she knows about it.

Keri covers up quickly telling Jyoti that Imlie informed her about the fast beforehand.

Meanwhile, Arpita asks Keri to take Imlie’s food to her room which makes Aryan stop Keri on her way to the room.

On her way to the room, Keri (Imlie) stumbles over footwear and realizes that it's the best time to check the footprint.

As Keri matches all the footwear on the rack with the footprint she has, the imprint matches a lady's footwear, however, she doesn’t know to whom it belonged.

At the same time, Aryan arrives there and chides Keri for still being there.

Keri tries to stop Aryan with her irritating, nonsensical talk as he moves toward the room. She even attempts to charm him but Aryan evades her and enters the room.

Keri gets surprised to see someone dressed up as Imlie in the room, however, says nothing till Aryan leaves after asking Imlie to eat.

Further on, Keri identifies Sunder dressed up as Imlie and narrates the entire story of what’s going on.

Sunder pacifies Keri (Imlie) that Aryan in his place is right but he also knows Imlie is not wrong and supports her.

Meanwhile, Harry takes Jyoti’s footwear on a plate for her as she vents her anger about being hungry on him.

On the other hand, Arpita finds Sunder wearing a long hair wig and goes out on looking for Imlie.

Sunder rushes up to Keri and asks her to hurriedly dress up back as Imlie.

Later on, as Arpita, Imlie, and Sunder spend some moments of fun together, Aryan arrives there asking Imlie that he has something to talk about.