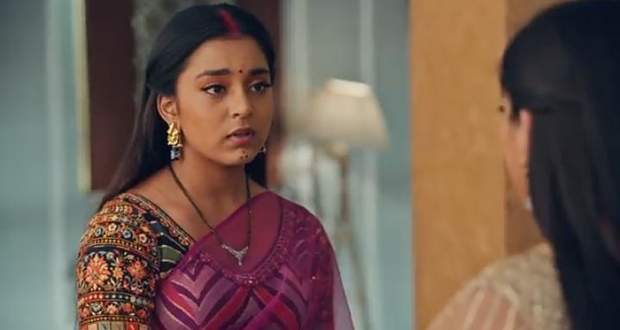 Today's Imlie 14th May 2022 episode starts with Aryan going against Narmada and telling her that he's going to look for Imlie.

Narmada stops Aryan and tells him that Imlie can leave him anytime as marriage doesn't matter to her.

Being shocked at the words coming out of her mother, Aryan leaves telling Arpita to talk to Narmada.

The doctors try to stop Aryan while he convinces Arpita and Sundar to let him go after Imlie.

Elsewhere, Imlie walks on the road recalling her moments with Aryan and crying while reaching a cloth dying place.

She is about to fall into the boiling pot of water when Aryan comes there and saves her.

Aryan suddenly hugs Imlie while she says that she is happy to see that he is fine.

Meanwhile, Aryan asks her if she is okay after Narmada's insults.

Back at the Rathore house, Narmada sees on the news that Imlie had removed the traffic to bring the donor for Aryan.

Narmada feels upset thinking that she misjudged Imlie while Neela and Gudiya manipulate her into thinking that Imlie had put the fake news there.

Further, Neela manipulates Narmada saying that she should stop Imlie from going to work.

Meanwhile, Imlie tells Aryan that Narmada is correct and tries to explain to him that a stain on a character never goes away by putting a white cloth in color and trying to remove the color.

Aryan takes the cloth from her and dyes it red saying that he will fill her life with so many colors that she will forget about the stains.

Further, Aryan drapes the clothes around both of them as Imlie asks him why he will do all that.

Feeling confident, Aryan tells Imlie that he wants to protect her and questions her why she did all of the things for him.

Imlie looks into Aryan's eyes as he drapes the cloth around Imlie.

However, before Imlie can answer, Aryan gets a call from Arpita who tells him to return home with Imlie as soon as possible.

Imlie agrees with Arpita and tells Aryan that they should return home.

To download Imli all episodes or watch Imlie today's (14 May 2022) latest full episode, go to hotstar.com