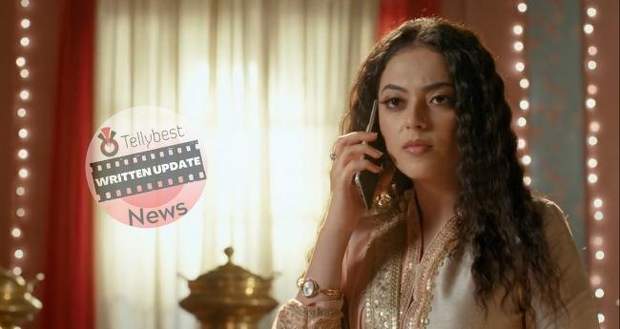 Today's Imlie 14th November 2022 episode starts with Kia taunting Imlie and trying to show Imlie her true place of being a middle-class wife in Rana's house.

However, Imlie talks back subtly and makes Kia frustrated and angry as she thought Imlie is innocent.

Imlie walks out while Kia decides to show her smartness to Imlie.

On the other hand, Atharva and Cheeni are talking about Imlie being the exact opposite of what Cheeni told Atharva.

Cheeni tries to manipulate Atharva and he believes her words while hugging her tightly.

Atharva says god is not letting him get away from Imlie anyhow and bids farewell to Cheeni.

Later, in Atharva’s room, Atharva apologizes to Imlie for coming late and gives her a glass of water.

However, Imlie smilingly takes the glass and says she will always wait for him.

Outside the Rana house, Kia puts her hand on Cheeni’s shoulder stopping her.

Kia tells Cheeni that she had heard the conversation between her and Atharva while Cheeni thinks Kia will blackmail her.

However, Kia put her hand forward to Cheeni and purposes to kick Imlie out of Rana’s house.

She persuades Cheeni to become a partner and both lock the deal by shaking hands but both smirk in their mind as they are deceiving each other.

Both Kia and Cheeni want Rana’s property and want to kick Imlie out of Rana's house first then they will deal with each other.

The next morning, Imlie gets a call from her editor and he requests Imlie to write 3 poems for the upcoming contest.

Imlie agrees reluctantly as it takes her 3 days to write a poem but Avinash (Imlie’s Editor) wants 3 until the evening.

At the same time, Devika enters and Imlie hides her diary behind the pillow hurriedly.

Devika informs Imlie about the havan in the house and she agrees to do all the preparations for the pooja.

Later, in the living room, Rudra is going to an important meeting and Akash offers to attend the meeting on his behalf.

However, Rudra taunts him for doing fraud in the meeting and shuts him up.

At the same time, Devika and Shivani stop Rudra and inform him about the pooja and Imlie’s family's arrival.

Imlie enters and starts coughing while Chachi Ji taunts her for messing up the pooja.

However, Atharva who was listening to their conversation from the front gate runs to Imlie’s side.

He worriedly asks Imlie if she’s okay and she assures him while smiling at his caring nature.

In Rathore's mansion, Rupi, Arpita and Sundar are talking about their plans of going to Rana’s house for the pooja.

Smirking, Cheeni recalls exchanging Rupi’s medicine with another so she can go to the pooja alone.

On the other hand, Cheeni meets Jatin and conspires against Atharva and Imlie and asks Jatin to prove his love to her.

In Atharva’s room, Atharva unintentionally helps Imlie with the 3rd poem after she listens to the rhythm of his song.

© Copyright tellybest.com, 2022, 2023. All Rights Reserved. Unauthorized use and/or duplication of any material from tellybest.com without written permission is strictly prohibited.
Cached Saved on: Monday 21st of November 2022 05:12:23 AMCached Disp on: Friday 9th of December 2022 05:14:57 AM