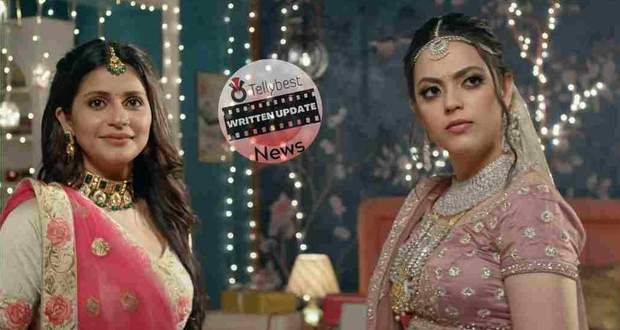 Today's Imlie 14th October 2022 episode starts with Cheeni apologising to Jatin and his family but firmly says she cannot do this marriage.

Rupi confronts Cheeni for breaking the marriage but she puts all the blame on Rupi as she knew that she was not happy with the marriage.

However, Rupi accuses Cheeni of doing this intentionally to ruin their name and raises her hand when Cheeni questions if she’s her real Bua or not.

Imlie grabs Rupi’s hand and tries to calm down Rupi.

Imlie apologizes to Cheeni as she didn't know that she was unhappy with this marriage and asks Cheeni if she does not want to marry Jatin.

Taking the opportunity, Cheeni asks Imlie if she agreed to marry Atharva because she liked him.

She asked Arto the same thing as he confessed his love for Imlie on the mike.

However, Kia and Akash get scared and he asks Sundar if Imlie will do the same thing in her marriage and threatens him to call Rudra.

Meanwhile, Arpita forces Cheeni to sit in the mandap but Imlie stops them and declares this marriage will not happen.

Imlie convinces Jatin’s parents by saying that Jatin and Cheeni’s relationship will become a breathing corpse if there’s no love between them.

Afterwards, Jatin breaks the marriage and goes away after thanking Cheeni for not sacrificing her life for him.

Later, Rupi challenges Cheeni to find a better guy than Jatin and she says he will come running to her.

Hearing Cheeni’s words, Atharva walks towards her but Imlie takes her away.

Meanwhile, Atharva walks out happily as he is proud of both Imlie and Cheeni’s fierce nature and opinion about love.

In Rana’s house, Rudra gets furious at the marriage news and Akash instigates him against her intentions towards Atharva.

In Rathore's house, Narmada throws the decorations and smashes the vase on the ground while Anu drinks her juice happily at Cheeni’s victory.

Sundar stops Narmada while Rupi confronts Anu by asking her if she put the idea of breaking the marriage.

However, Rupi cries as she was not able to refrain Cheeni from becoming another Malini.

Just then, Imlie apologises to her family for going against them and their decision regarding Cheeni’s marriage.

Later, Arpita tells Imlie to keep Karvachauth fast for Atharva while they will call his family to their house.

In Cheeni’s room, Cheeni calls Atharva a coward as he didn’t confess his love in front of everyone.

At the same time, Atharva throws a page in Cheeni’s room through the window and signs her to read the page.

He calls Cheeni in the temple tomorrow evening while she dreams about marrying him in the same temple and going to a 5-star hotel.

Meanwhile, Imlie sees Atharva on the road and goes to her room to talk to him while Cheeni is waving at him.

© Copyright tellybest.com, 2022, 2023. All Rights Reserved. Unauthorized use and/or duplication of any material from tellybest.com without written permission is strictly prohibited.
Cached Saved on: Monday 21st of November 2022 01:06:40 AMCached Disp on: Wednesday 7th of December 2022 02:51:54 PM