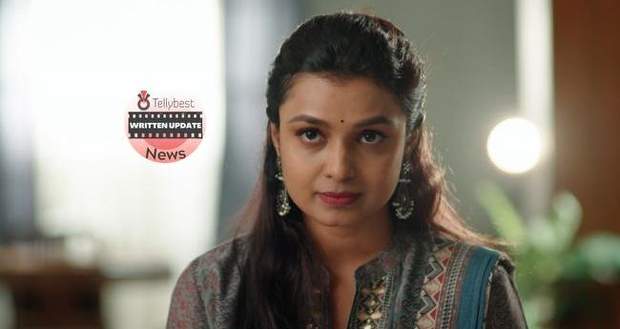 At the same time, Cheeni talks to Imlie from a window and Imlie informs her she needs some more time.

Later on, Anu is coming with the Varmalas but Cheeni demands the Varmalas from her and takes it to the Aryan and Malini.

Meanwhile, taking the Varmalas Aryan and Malini are thinking Imlie is gone from their life and is never going to come back.

Anu tells Malini to put the Varmala on Aryan but her dupatta gets stuck on the cloth seat while Cheeni recalls stapling Malini's dupatta on the cloth.

At the same time, people start to arrive which shocks Malini as she hasn’t invited anyone.

The office people, jeweller, Cheeni's kidnapper and the school cook congratulate Malini for her marriage sarcastically and disclose every evil plan of her and start to roam around her.

Malini holds her ears and gets frustrated and Aryan tries to stop them but furious Malini retorts to them that they didn’t do their work correctly.

Meanwhile, Malini furiously says to the truck driver that Imlie must have been dead if he had done his work correctly.

Hearing Malini's words, Aryan gets shocked and confronts Malini but Neela and Preeta interrupt him.

Neela and Preeta inform Aryan about the people being Imlie’s guest and informs him that they are the one who has given her all the contact number of the people.

Malini gets furious while Aryan asks for Imlie and she reveals herself out of hiding.

Aryan takes slow steps toward Imlie and both Aryan and Imlie’s eyes are filled with guilt and sadness.

Meanwhile, Imlie shows her gratitude to her guests and sends them home.

Just then, Imlie demands Cheeni to go to her room but Cheeni exclaims that Khali Mali has tortured has for so long and now she wants to see Imlie beating Malini.

However, Imlie scolds Cheeni and sends her to the room and accuses Malini of leaving Cheeni in the basement.

Malini confronts Imlie to show evidence of her evil plans and her eyes fill with tears of frustration.

Afterwards, Imlie instigates Malini by narrating to her the evil plans she has done until now while the Rathore family and Aryan get shocked.

Furious Malini screams at Imlie to stop crying and walks toward her while being scared, Imlie stumbles and Aryan holds her close to his chest.

Later, Malini laughs crazily at Imlie and Aryan and calls them the biggest fools.