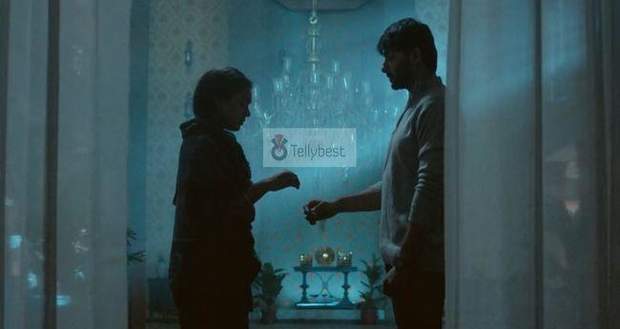 Today's Imlie 15th August 2022 episode starts with Cheeni teasing Aryan while he picks her up and takes her to eat dinner.

Meanwhile, Imlie is on the bus to Delhi as she keeps missing Cheeni.

Further, Aryan helps Cheeni change her outfit and does her hair after which she sits to eat.

Just then, they hear a knock on the door and Aryan makes Cheeni hide as he attends to the person at the door.

However, as soon as he opens the door, Preeta barges inside with the sugar as Cheeni looks on.

Aryan tries to get her out of the room while Preeta keeps trying to talk him into having a dinner date.

Cheeni gets annoyed and thinks that only Imlie should be this close to Aryan.

Aryan manages to kick Preeta out of the room and tells Cheeni to come out but Chini looks the other way acting annoyed.

Meanwhile, Preeta goes to Malini and complains while asking her how she married the love of her life.

Malini gets angry and tells Preeta to not interfere in her matters anymore and makes Preeta leave angrily.

Later, Malini sees the news about Chini missing on news and gets worried about the possibility of her being in the Rathore house.

On the other hand, Imlie reaches Delhi as she recalls her bittersweet past in the city.

Imlie states that she will always be Imlie from Pagdandiya as Delhi never accepted her.

Imlie thinks that she will leave once she take Cheeni.

Back at the Rathore house, Cheeni makes Aryan play the game of saying one thing that comes to his mind when a specific word is said.

Using the game as a ploy, Cheeni makes Aryan recall his memories with Imlie which makes him emotional and he leaves the room.

Meanwhile, Cheeni gets caught by Malini and tries to run away by getting injured on the head and falling unconscious.

Malini picks her up and goes towards the back door.

Inside the house, the family members gather in the dining room while Aryan learns that Cheeni is missing and goes to look for her.

At the same time, Malini remembers that Anu is still in the Rathore house and keeps Cheeni in the storage room to meet Anu.

On the other side of the house, Aryan and Imlie come in front of each other and close their eyes and feel a pull as they both extend their hand toward each other.

© Copyright tellybest.com, 2020, 2021. All Rights Reserved. Unauthorized use and/or duplication of any material from tellybest.com without written permission is strictly prohibited.
Cached Saved on: Friday 30th of September 2022 11:22:01 PMCached Disp on: Saturday 1st of October 2022 01:49:38 AM