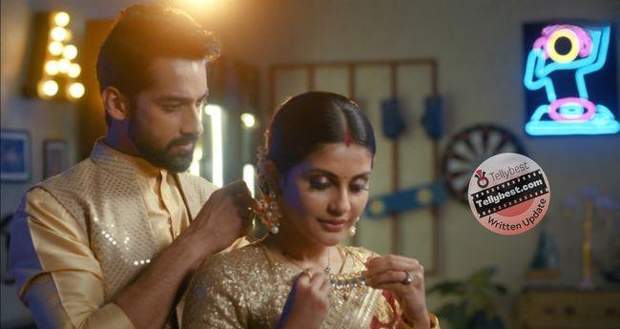 The guy apologizes to Atharva and Imlie while returning the bangles to him and escapes saying that they don't know who stole the bangles and sold it to them.

Atharva gives them to Imlie and they return home to hand over the bangles to Devika.

Rudra praises both of them and tells them that he is sure the family's future will be successful with them being in charge.

Later, Imlie asks Atharva if saying thank you would be too much and he nods his head while Imlie says that she will apologize instead.

Atharva gets confused while Imlie calls Naina and apologizes for the event incident and patches up with her.

Further, Imlie and Atharva are on a drive while Cheeni tries to escape from Abhishek by lying to him and saying that she will call Rupi since she is sick.

However, Abhishek calls Arpita and finds out that Cheeni is lying when she comes back and sits in the chair.

Just then, she sees Imlie and Atharva coming to the same tea stall and hides with Abhishek while he asks her what's wrong.

Cheeni honestly tells him that she wants to live life in luxury and comfort and that he can't give it to her.

Abhishek tells Cheeni that he liked her honesty and bids her goodbye while she also thinks to escape without being seen by Atharva or Imlie.

At the same time, Atharva eats the Paan from the shop not knowing that it is alcoholic, and gets intoxicated while driving the car.

Imlie gets scared seeing the oncoming trucks and shouts at Atharva who is still intoxicated due to the Paan.

While trying to save themselves from the trucks, the car collides with a car injuring both Atharva and Imlie.

Imlie regains consciousness and starts trying to wake up Atharva.

Later, Atharva wakes up in his room while Imlie is sitting beside him waiting for him to wake up.

Atharva asks her if she's fine and she says that he was the one who had eaten the 'Paan' and got the most injured.

Imlie further indirectly calls him boring as he leaves from there while Cheeni comes there and starts telling Atharva that he almost took her life by making her worry about it.

Atharva praises Imlie in front of Cheeni and tells her that he wants to reveal the truth to Imlie.

Cheeni angrily says that he should and leaves.

Later, the police arrive at Rana's house as Imlie opens the door.

The police ask about the car and Imlie recalls Atharva toppling over stalls.

She lies to the police that the car is hers while the family gathers at the front door nearing the commotion.

The police officer tells Imlie that she is under arrest.

© Copyright tellybest.com, 2022, 2023. All Rights Reserved. Unauthorized use and/or duplication of any material from tellybest.com without written permission is strictly prohibited.
Cached Saved on: Wednesday 25th of January 2023 01:55:55 PMCached Disp on: Thursday 9th of February 2023 04:21:18 AM