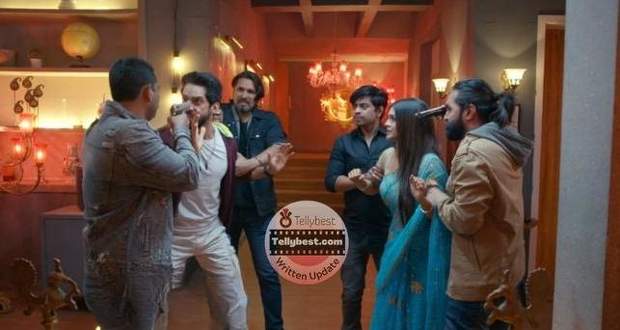 Today's Imlie 15th January 2023 episode starts with Atharva and Imlie arguing while Atharva gets a call from Abhi.

The goons hear his phone ring and take it from him while they put it on speaker hearing Abhi ask about the inside situation.

Back inside, the goons laugh and aim a gun at Atharva.

On the other hand, at the Rana house, Rudra gets angry seeing Akash go away while Akash and Keya talk to the controller of the thugs and bribe them to let Atharva and Devika go.

Further, the couple comes to Rudra and tells him the news expecting praise.

However, Rudra rebukes them for forgetting Imlie and considering their duty as their helper.

Back at the shop, the goon gets a call and releases Devika and Atharva.

However, Atharva bids Devika goodbye and closes the door to his freedom.

The goons angrily take him with the remaining hostages and make him sit.

Back inside the jewelry shop, the thugs separate Imlie and put her in the godown with the rest of the goons.

Atharva argues but the goons silence him using his guns.

Cheeni goes to sit beside Atharva and tells him that she knows he came there for her.

However, Atharva rebukes her for putting Imlie in danger and tells her that he didn't even know she was there.

Meanwhile, inside the godown, the goon manages to open the locker and goes inside while Imlie locks him inside and presses the transmitter to send a fake signal to the goons outside.

The goon outside sees the transmitter glowing and gets angry thinking that the thugs inside the godown have betrayed them since they are still not out.

Inside the godown, Imlie tries to escape from there but the other goon comes there and points his gun at her.

Meanwhile, in the hall, Imlie's family gets worried thinking that something has happened to her.

However, the goons from godown come there at the same time with Imlie as a hostage while they inform the head goon that Imlie has to die.

The leader gets angry and points his gun at Imlie while Atharva starts fighting with the goons with the help of the Rathod family.

However, the goons again overpower them and force them into submission.

© Copyright tellybest.com, 2022, 2023. All Rights Reserved. Unauthorized use and/or duplication of any material from tellybest.com without written permission is strictly prohibited.
Cached Saved on: Wednesday 25th of January 2023 12:42:47 PMCached Disp on: Wednesday 1st of February 2023 05:30:45 PM