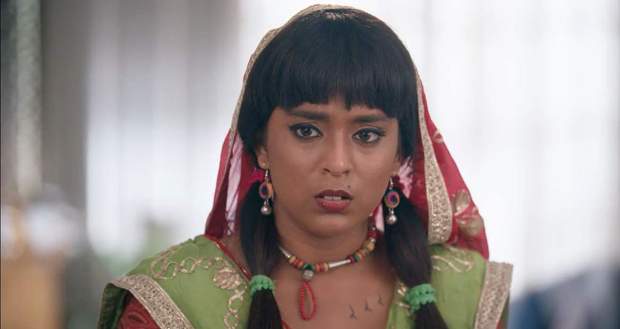 Today's Imlie 15th June 2022 episode starts with Imlie and Aryan arguing while he tells her to sit down and eat first.

Imlie recalls her memories when she sees the shadow of someone wearing the sandals.

Rushing out of the room, Imlie tries to follow the girl wearing the sandals but fails and thinks to find them at any cost.

Later, Narmada informs Jyoti that they are going to a temple and tells her to come with them.

Meanwhile, Gudiya asks Neela why she hasn't done anything about Jyoti's ex-husband while Neela says that she has a plan.

Later, everyone gets ready for pooja while Imlie asks Jyoti why Harry isn't there.

Flashback shows, Jyoti instigating Harry and making him injure himself.

Back in present, Imlie realizes that she's forgotten her footwear and goes to wear those.

However, Jyoti offers her own sandals and gives them to Imlie who realizes that Jyoti is the attacker.

Meanwhile, Aryan recalls all the moments when Imlie defended Madhav and gets even angrier.

Imlie feels stuck wondering if she should trust her instincts or the evidence she found.

Meanwhile, Aryan tries to find more evidence and goes to the pharmacy to get the footage.

However, they do not keep the footage of that too long ago and Aryan feels disappointed.

Back at the temple, Imlie keeps looking back at Jyoti who notices this and acts devotionally singing the song.

Imlie feels at par with her emotions and wonders whom to trust or whom to not trust.

Later, Imlie is lost in her thoughts and is about to fall when Aryan saves her and scolds her for being careless.