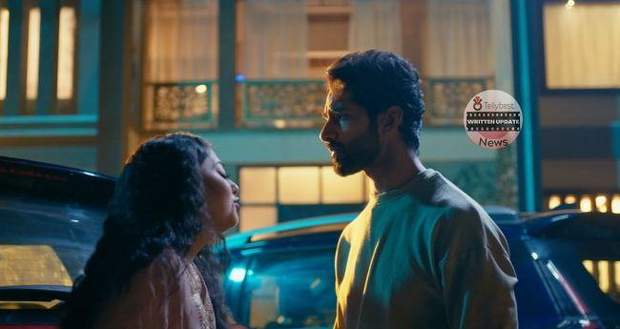 Today's Imlie 15th November 2022 episode starts with Cheeni entering the house and when Devika asks her about Rupi, Arpita and Sundar she makes an excuse.

At the same time, Atharva and Imlie get praised by their aunties for having great chemistry.

Meanwhile, Cheeni frowns at the comment and Kia taunts her saying if she will keep rolling her eyes or will do something to separate Imlie and Atharva.

Cheeni smirks and tells Kia that she has started a new plan and Jatin enters disguised as a Godman with a fake beard and moustache.

Later, in a secluded corridor, Jatin assures Cheeni that his men have taken care of the cars and the network.

Jatin requests Cheeni to take a selfie and removes his moustache while Cheeni scolds him thinking anyone can see him.

Coincidentally, Imlie enters and grabs Cheeni’s phone in frustration as she was not able to send the poem to the editor due to network issues.

Scared, Jatin turns around and puts the moustache on his face and Imlie sees him.

Cheenu lies to Imlie that Baba (Jatin) is doing purification of every corner of the house.

Jatin starts to chant and Imlie believes Cheeni’s fake lies and takes her away.

Afterwards, Imlie narrates a poem to Cheeni for her feedback and gives her the page.

Imlie leaves after Cheeni praises her half-hearted and Cheeni throws the page in the poem.

At the same time, Atharva grabs her shoulder and traps her between her arms and the wall.

Atharva misunderstands Cheeni as Shyra and tells her the story about falling in love with her first poem backstage on the concert day.

He requests Cheeni to narrate the same poem that she did on the concert day while Cheeni gets scared.

Cheeni tries to stall Atharva but he does not listen to her Shivani interrupts them.

Shivani glares at them and Cheeni leaves embarrassed while Atharva tries to explain the situation to Shivani.

However, Shivani gives a reality check to Atharva saying Imlie is his life partner.

Seeing the opportunity to embarrass Imlie, Cheeni forces Imlie to sit in the pandal and sing as everywhere is her close family.

However, Imlie sits blankly with eyes full of tears and Atharva starts to play a beautiful tone on the flute.

Everyone claps and Jatin slams a powder into the fire and puts their plan into action.

Smoke fills the whole room while Jatin and his men start to remove women’s jewellery.

Imlie sees Baba’s actions and runs behind him but crashes into Atharva and tells him about the fraud Baba.

Atharva runs behind the Baba and fights all his goons bravely but they overpower him and send him flying.

He lands near the havan and hits his head on the corner of the havan’s fireplace.

Everyone screams Atharva’s name while Imlie helps him to sit up.

© Copyright tellybest.com, 2022, 2023. All Rights Reserved. Unauthorized use and/or duplication of any material from tellybest.com without written permission is strictly prohibited.
Cached Saved on: Monday 21st of November 2022 01:39:44 AMCached Disp on: Tuesday 29th of November 2022 12:37:16 AM