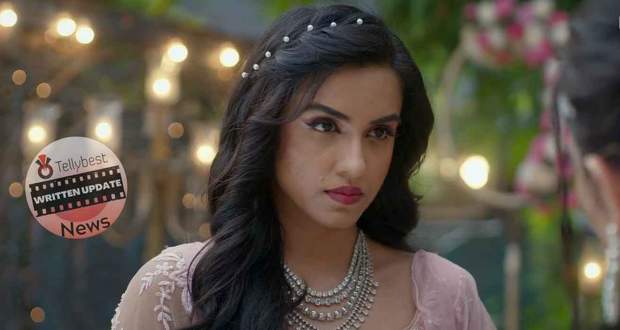 Today's Imlie 15th October 2022 episode starts with Imlie entering her room and going towards the window to meet Atharva.

However, she gets disappointed seeing Atharva driving his car out of Rathore mansion.

She finds a page on the floor and gets happy thinking that Atharva wants to meet her in the temple.

On the other hand, Cheeni is ecstatically removing her makeup thinking Atharva is hers now not Imlie’s.

Meanwhile, Kia enters and taunts them for choosing lavish jewellery for simple Imlie and calls her down market.

However, Shivani taunts Kia saying they used to think that they are getting a daughter in her but they got something else.

Insulted Kia shows Akash a necklace while he consoles her by saying they will own 50% jewellery.

At the same time, Atharva enters and he thinks that he will confess his feelings to Cheeni today and break his engagement with Imlie.

Anu taunts Imlie for her apathy towards Cheeni but Rupi insults Anu for her sarcastic comments towards Imlie.

Afterwards, Cheeni happily tells Anu that Arto loves her and she asks Cheeni if the Rana family will agree to their relationship.

However, Cheeni tells her she does not expect to become an ideal daughter-in-law to Rana's family but she just wants to spend their wealth.

On the other hand, Atharva gets a message from Cheeni but he crashes into Rudra and his phone falls.

Suspicious Rudra picks up the phone while Rudra is scared that he will see Cheeni’s message.

However, Rudra gets happy seeing Imlie’s name on the screen and walks away happily thinking Atharva has accepted Imlie.

Atharva picks up the call while Imlie thanks him for the gifts and advises he could have given the gifts in the evening also.

Cheeni gets scared thinking Atharva told Imlie the truth but innocent Imlie misunderstands her for colour-coding her outfits with jewellery.

Imlie tells Cheeni to keep the Har (necklace) but Cheeni says the Har (defeat) is hers because she will win.

Afterwards, Rupi urges Imlie to get ready for her meeting with Atharva in the temple while getting suspicious of Cheeni.

In the temple, Cheeni meets Atharva and acts like a victim who broke her wedding for love.

Atharva gets impressed and confesses his love to Cheeni while holding her shoulder.

Cheeni acts in denial but he persuades her and says “I love you”.

At the same time, Arpita, Rupi and Imlie enter the temple while Imlie loses her balance due to dizziness.

© Copyright tellybest.com, 2022, 2023. All Rights Reserved. Unauthorized use and/or duplication of any material from tellybest.com without written permission is strictly prohibited.
Cached Saved on: Monday 21st of November 2022 06:04:25 AMCached Disp on: Saturday 10th of December 2022 01:45:00 PM