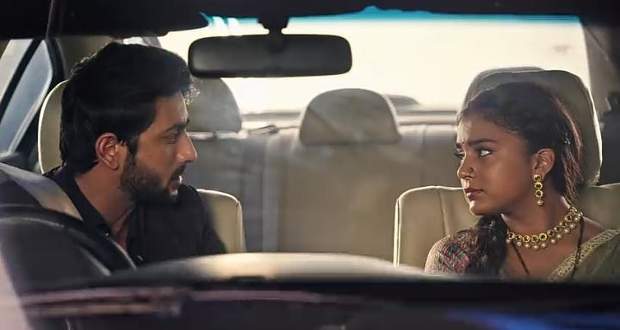 Today's Imlie 16th April 2022 episode starts with Imlie being taken to Seth Purandas at an old warehouse by Ashwin and his goons.

Purandas calls Imlie a child as Imlie threatens them saying that Aryan will teach them a lesson after learning about Arvind's murder.

Ashwin goes toward Imlie to take the memory card but suddenly Imlie puts it in her mouth shocking everyone.

Ashwin is about to forcefully open Imlie's mouth when Aryan comes there and attacks Ashwin knocking him out.

Meanwhile, at the Tripathi house, Nishant is helping Pankaj record a video when they notice bags on Aditya's bed.

They question Sundar who tells them that Aditya is not in the home since the morning confusing them even more.

Back at the warehouse, Aryan frees Imlie from the ropes and they both start fighting the goons when Imlie gives Aryan the memory card mid-fight.

At the same time, Nishant calls Aditya to ask him about the trip when Aditya informs him that he wants to stay away from everyone else for a while making Nishant and Pankaj worried.

Imlie again takes a hold of the memory card and gives it to Aryan with the information to run away from the warehouse and go to the police.

However, the goons manage to catch both Imlie and Aryan and take the memory card making Imlie lunge to save it but fail.

Seth Purandas mocks Aryan and reveals to him that he killed Arvind due to business rivalry and further framed it as an accident.