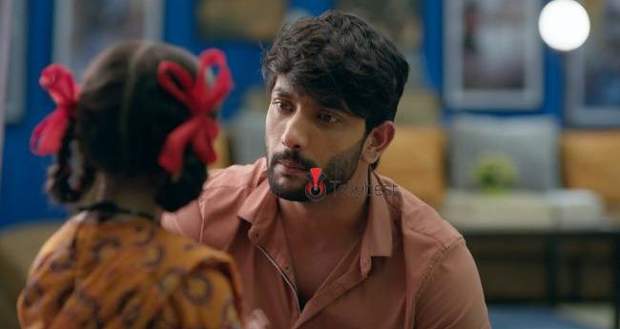 Today's Imlie 16th August 2022 episode starts with Aryan and Imlie both walking nearby each other when he notices her and halts in his steps.

Further, he walks toward Imlie and closes his eyes seeing her do the same.

As they both extend their hands towards each other, Aryan feels the teardrop falling from Imlie's eye and gets emotional.

However, before he can open his eyes, Imlie runs away from there feeling vulnerable.

Further, she hides from the Rathore family and gets emotional as she sees Narmada lighting the diya in the temple and going with Arpita, Sundar, and Jaggu.

A strong gust of wind flows and Imlie rushes to save the diya from blowing off.

Afterward, Imlie helps Sundar from falling and helps Arpita in finding a candle without being seen.

Imlie hides behind a pillar and cries tears of happiness and scolds herself for it.

Elsewhere, Aryan bumps into Malini and leaves with the excuse that he's going to check why the electricity went out.

However, Malini smirks as she thinks that the person Aryan is finding is locked in the storage room.

On the other side of the house, Cheeni regains consciousness and gets annoyed after learning that Malini has locked her in the room.

She tries to open the door when Imlie suddenly comes there and scolds her.

However, Cheeni reveals that she knows about Imlie and Aryan's marriage and that she doesn't want to go back to Pagdandiya.

Imlie scoops her in her arms and runs to leave the house with the Shawl covering both of their faces.

Just then, the electricity comes back and the family gathers mistaking Imlie and Cheeni for thieves.

Malini orders the guards to beat the thieves and Imlie covers Cheeni's mouth requesting her to keep quiet.

As they are getting beaten, Aryan comes there and shouts for the guards to leave.

Afterward, Aryan uncovers the shawl revealing Imlie and Cheeni which the Rathore family is shocked to see them.

Narmada and Arpita hug Imlie while saying that they won't let her leave them anymore.

Sundar hugs Imlie as Cheeni introduces herself to everyone saying that Imlie is not her mother but her everything.

Realizing that he's not behaving like himself, Aryan rushes to his room while Imlie and the rest of the Rathore family go inside.

© Copyright tellybest.com, 2020, 2021. All Rights Reserved. Unauthorized use and/or duplication of any material from tellybest.com without written permission is strictly prohibited.
Cached Saved on: Sunday 2nd of October 2022 06:28:21 AMCached Disp on: Thursday 6th of October 2022 05:10:27 PM