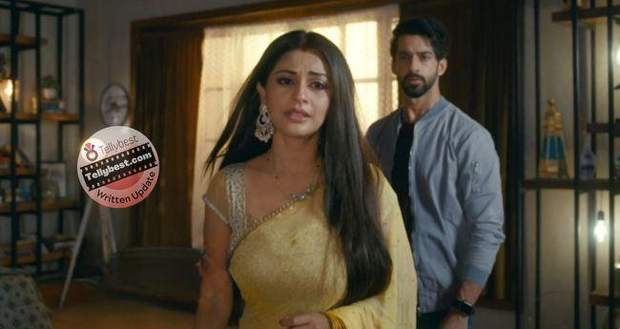 Today's Imlie 16th December 2022 episode starts with the police officer informing the Rana family that Imlie is under arrest.

The police take Imlie away while Atharva goes after her in his car and realizes that Imlie took the blame on herself to save him since he was driving the car.

Meanwhile, at the Rathod house, Abhishek calls Rupy and tells her that he is impressed by Cheeni's honesty and would be impressed to have a relationship with her.

Back at the police station, Aryan argues with the police telling them that he was the one who was driving the car.

However, the Police officer tells him that he won't bring Imlie out of the cell since lying to the police is also a punishable crime.

The lawyer tells Rudra that he will get both Imlie and Atharva out of the jail the next day.

Elsewhere, Cheeni is talking with Rupy who reveals to her that Abhishek is a multi-million hotel chain owner.

Cheeni gets shocked and tells Rupy that she can meet him again sometime later.

Rupy smirks as she disconnects the call and thinks that her plan worked.

Back in jail, Atharva rubs Imlie's hands together to keep her warm after which they both entertain the constables with their music.

The police officer also joins their entertainment while Atharva requests to let him and Imlie go.

However, the police officer says that he does not play with his job and tells them to go to sleep.

Atharva turns to Imlie and thanks her for coming to jail for him and tells her that with her, even the buzzing of mosquitos sounds like an orchestra.

Imlie laughs as she says that they have to live together their whole life while Atharva feels guilty thinking that he will be spending his life with Cheeni.

The next day, Cheeni tells Anu that she is planning to say yes to Abhishek.

Anu asks her if she does not want Atharva while Cheeni reveals that she never liked him and only wanted the luxury and comfort that Atharva's wealth could have given her.

Anu thinks that she won't be able to get her revenge on Imlie and tries to convince Cheeni who says that she will handle both Atharva and Abhishek.