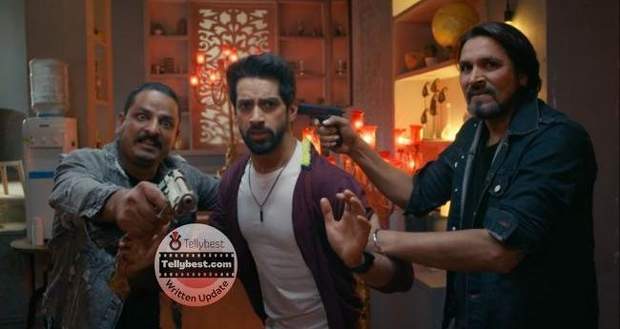 Today's Imlie 16th January 2023 episode starts with the goon pointing his gun at Atharva while Imlie looks on anxiously.

Atharva suddenly attacks the goon and starts fighting with him while the goon accidentally shoots.

Everyone gets shocked while Atharva looks back at Imlie and blood is pouring from her hand.

Imlie falls to the ground while Atharva shouts her name and hits the goon making him unconscious.

Atharva rushes to Imlie and tries to keep her away saying that she needs to continue scolding him by starting daggers through her big eyes.

Just then, the police enter and arrests the goon while telling the hostages that their families are waiting for them outside.

However, the hostages refuse to leave until Imlie is not treated and tell the police officer to call a doctor. The doctor checks on Imlie and tells everyone that the bullet just brushed past Imlie's arm and tells the family she needs complete bed rest.

As the doctor leaves, Abhi rushes to Cheeni asking her if she is okay. However, Cheeni goes and tries to comfort Atharva saying that he is very strong while Atharva stands away from her and tells her that it is because Imlie is very strong and brave.

Atharva rudely tells Cheeni to return home with Abhishek as he and Imlie will take care of each other.

Later, at the Rathod house, Cheeni paces in her room angrily while telling herself that she will break up with Abhishek and then will snatch Atharva from Imlie.

However, Rupy comes there just then and tells Cheeni that she deserves a slap from her too, and reveals that she knows what Cheeni is planning to do.

Rupy taunts Cheeni and tells Cheeni she won't leave the house until the marriage is done and states that all the rituals will happen in Rathod's house only.

Rupy leaves while Cheeni looks at her disappearing figure with anger.

Back at the Rana house, Atharva looks at a sleeping Imlie and thinks about Cheeni's message while stating that he does not want to hide anything from Imlie anymore.

Imlie wakes up just then and jokes asking Atharva if she was snoozing since he is looking at her.

Further, Imlie asks him why he came to NPP jewelry while he sarcastically tells her that he was childhood friends with the owner and questions her back as to why she didn't leave.

She asks him if he didn't know while Atharva sweetly asks her if she's okay now. Imlie also gives a shy smile as she says that she is okay now.

Atharva feels glad to hear it as he holds Imlie's hand and tells her that she had scared him to death.

Atharva realizes the closeness between them and starts stammering while Imlie notices the time and starts panicking.

She stands up from the bed and starts looking for her laptop while Atharva scolds her and makes her sit back down telling her that he has already talked to her boss.

He further sits beside her and talks about how he was scolded by the doctor when he called for her more than four times due to his worrying.

Imlie laughs while she complains that she cannot fall asleep. She tells Atharva to sing a lullaby for her and Atharva refuses but sings it for her afterward while she enjoys his singing.

The next morning, Arpita and Rupy tell Cheeni that they are leaving while talking about Sundar staying home since he was a little sick.

Cheeni talks to Anu and tells her that the family has left while Anu tells her to remember the next step. Cheeni further short-circuits the electricity meter and leaves the house as it starts catching fire.

Cheeni praises herself saying that she is family oriented since the whole family will have to leave their house.

Cheeni bids goodbye to the house of bad memories and leaves. Meanwhile, at the Rana house, Imlie argues with Atharva stating that she does not want to rest.

Atharva calls Rudra and Devika inside the room and they also tell Imlie that she should rest.

Imlie continues arguing in Hindi saying that she does not want to lay on the bed uselessly while Atharva tells her to not use her skills in Hindi on him.

Further, Devika and Rudra tell Imlie that they are glad both of them are okay and want Imlie to stay rested.

They tell Imlie to get dressed for the morning and come downstairs for breakfast.

Later, Imlie calls Sundar but he doesn't pick it up after which Imlie calls the landline. Sundar finally picks up the call but sees the fire and starts trying to get out of the room while shouting for Rupy and Arpita.