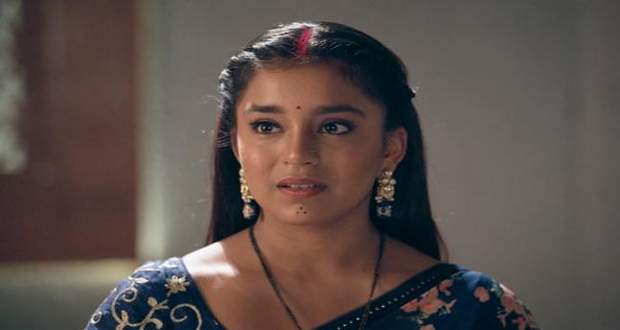 Today's Imlie 16th June 2022 episode starts with Aryan telling Imlie that he is going to find out the evidence against Madhav while Imlie wonders.

The next day, Keri (Imlie) works while the phone rings, and Gudiya demand her to pick up the call.

Then Gudiya reluctantly picks up the call and Sundar tells her in a high-pitched voice that Madhav has regained consciousness.

However, Gudiya doesn't act angry or anxious confirming to Imlie unknowingly that she is not the perpetrator.

Further, Imlie manipulates Gudiya to shout about Madhav to the whole family and the family gets happy except for Jyoti and Aryan.

Jyoti clenches her fists thinking to get rid of Madhav while Aryan also thinks to confront him.

Later, Jyoti punches the mirror in anger as Harry mocks her for her failing pain.

Meanwhile, Aryan thinks about making Madhav confess and then killing him while Imlie overhears him and gets worried.

At the same time, Jyoti covers Harry's face in blood with her injured hand and force-feeds him some sweets.

However, Harry falls to the ground and gasps for air while Jyoti smiles saying that there is poison in the sweets.

Meanwhile, Keri (Imlie) prevents Aryan from talking to the police by making him slip on the water.

However, she saves him and shares an eye lock while Aryan's phone falls into the bucket of water.

Further, Keri flirts with Aryan but he gets angry at her and leaves.

Imlie later apologizes to Aryan in her thoughts and thinks that she has to do this to find the perpetrator.

Back in Jyoti's room, she gives Harry an anecdote and says that he was just a test subject for the poison while Madhav is the real target.

Later, Imlie brings Madhav home with his head fully bandaged while Aryan tries to stop them from entering.

© Copyright tellybest.com, 2020, 2021. All Rights Reserved. Unauthorized use and/or duplication of any material from tellybest.com without written permission is strictly prohibited.
Cached Saved on: Sunday 2nd of October 2022 07:06:50 AMCached Disp on: Friday 7th of October 2022 02:09:08 PM