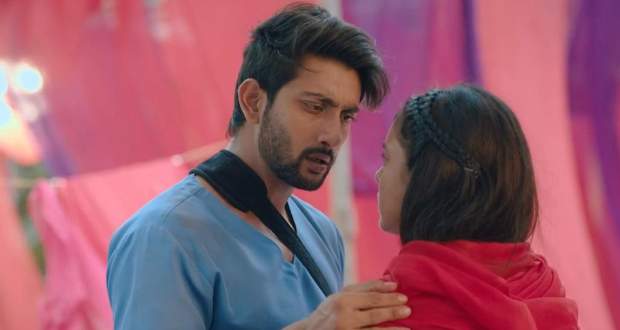 However, Narmada holds Aryan's hand and scolds him for discharging himself from the hospital.

Imlie comes forward and tells Narmada that she apologizes for whatever she has done.

Narmada taunts Imlie and demands her to quit her job which shocks everyone.

Aryan stands up for Imlie and tells Narmada that he should also quit then.

Narmada stands shocked at Aryan talking back to her while he states all the things Imlie does to prioritize the family before her job.

Finally, Aryan announces that he will change his name but will not let Imlie quit and leaves with Imlie.

Later, Jyoti is furious seeing Aryan stand up for Imlie when she was the one who brought the blood for his surgery.

Just then, Arpita comes there and informs them that Narmada is being influenced by Neela and Gudiya only and is not even leaving her alone for a second.

Imlie says that she will handle them and the next morning, Imlie blares loud music in Neela and Gudiya's room.

Further, Imlie warns them that she will show them her tricks if they do not stop instigating Narmada against her.

Meanwhile, Aryan and Arpita enjoy as they watch the scene unfold before their eyes from the windows.

Later, Imlie returns to her room and sees Aryan holding his head in his hands.

She worries for him while he tells her that he is having a headache.

After having a silly banter, Imlie massages Aaryan's head while he wishes that the misunderstandings between Narmada and Imlie are solved soon.

To download Imli all episodes or watch Imlie today's (16 May 2022) latest full episode, go to hotstar.com