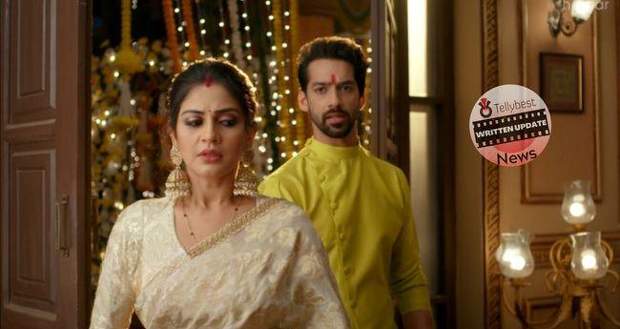 Today's Imlie 16th November 2022 episode starts with Imlie running towards Jatin’s men in anger while they run out.

Suddenly one man throws a knife toward Imlie but Cheeni comes in front of her and the knife pierces through Cheeni’s arm.

Everyone runs towards Cheeni and Atharva pulls out the knife and Cheeni screams out in pain.

Seeing Cheeni’s critical stage Atharva asks everyone to call an ambulance but to their shock, there’s no network.

Imlie explains crying that she did everything right and she didn't know who the godman was.

Frustrated, Atharva stops their banter and picks up Cheeni in a bridal style while Rudra stands at the gate, shocked at the scene.

Rudra sees Cheeni in Atharva's arms and recalls his and Cheeni’s conversation which says Rudra will lose to her.

He goes inside while Atharva takes Cheeni to a room with Imlie to treat her wound.

Meanwhile, Rudra enters and orders Devika that Cheeni cannot live in his house and explain Cheeni’s bad intentions to Devika.

Later, Imlie tries to persuade Devika and Rudra to let Cheeni live in Rana's house so she can take care of her.

However, Devika tells Imlie that Cheeni cannot live in their house as Cheeni will only find comfort in her own home.

Imlie cries and begs Devika to let Cheeni live at their house but Devika and Rudra do not agree.

In the room, Kia enters applauding and praises Cheeni for shedding blood and sweat to fulfil her plan.

Hearing her praise, Cheeni smirks and tells Kia that he has filled Imlie’s mind with enough guilt to live in Rana's house.

At the same time, Imlie enters and declares that Cheeni cannot live in her house while Atharva stands behind Imlie and concretes Imlie’s decision.

Kia laughs in her mind and enjoys the drama which is breaking Cheeni’s overconfidence while Imlie goes to pack her bags.

In Rathore's house, Sundar gets a call from Atharva about Cheeni’s state and Rupi feels guilty for her earlier actions of scolding Cheeni.

In the Rana house, Cheeni cannot believe that Imlie can do this to her so she messages Jatin and calls him to the Rana house desperately.

Jatin happily reads the message which says Cheeni will elope with him and they will marry right away.

In a secluded corridor, Imlie cries and blames herself for Cheeni’s state while Atharva sees her and goes to console her.

He sits on his knees and tries to console Imlie but she tells him that Cheeni was raised by her parents and she will lose them again if she loses Cheeni.

However, Atharva assures Imlie and she holds his hands calling him her emotional support.

Afterwards, Imlie hugs Atharva and cries in Cheeni’s worry while he consoles her saying Cheeni will be alright.

© Copyright tellybest.com, 2022, 2023. All Rights Reserved. Unauthorized use and/or duplication of any material from tellybest.com without written permission is strictly prohibited.
Cached Saved on: Monday 21st of November 2022 01:04:57 AMCached Disp on: Wednesday 7th of December 2022 12:57:01 PM