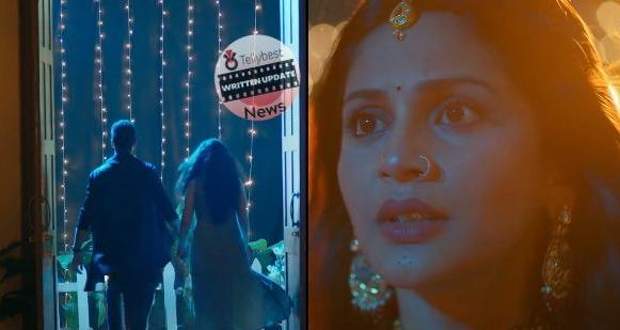 Today's Imlie 16th October 2022 episode starts with Cheeni confessing her love to Atharva and acting like a victim.

She says he is getting married to Imlie so she suppressed her love for him.

On the other hand, Imlie prays to god happily as she has kept a fast for Atharva for the first time.

At the same time, Cheeni tells Atharva that her family will hate her as they only love Imlie.

He takes Cheeni’s hand and takes her to a mandap while she asks him if he can erase her family's hate with the sweetness of his love.

Downstairs, Imlie is taking circles around the small temple and making promises to herself.

Afterwards, Atharva pulls Cheeni close and agrees to all her promises.

Atharva romantically tells her that he calls her Hookline because he wants to hear her name in his songs only.

Downstairs, Arpita and Rupi tease Imlie who is waiting for Atharva.

In the mandap, Cheeni asks Atharva to fill her hairline with sindoor and prove his love to her.

He holds the sindoor box hesitantly but it stumbles from his hand and the sindoor falls on Imlie’s hairline.

Unaware Atharva tells Cheeni they should tell Imlie the truth so they can marry as soon as possible.

Meanwhile, Imlie thinks of sindoor as god’s blessing and gets a call from Atharva to meet him in the mandap.

Just then, Akash and Kia confront Atharva for meeting Cheeni and he informs them about their love.

However, Kia declares that Rudra will kick out Atharva from the house and his legacy while Atharva says he will leave the house himself for his love.

Meanwhile, they wait for Imlie but Cheeni releases her hand from Atharva’s hold when she sees Imlie coming.

Akash and Kia change the topic and tell her about coming to surprise her while stopping Atharva from telling her the truth.

Afterwards, Atharva confronts Cheeni for not telling Imlie the truth and she cries saying she cannot hurt Imlie.

Akash suggests they tell the truth the day after tomorrow and give Cheeni time to digest everything.

Cheeni agrees to Akash’s words but Atharva urges her to talk to Imlie today only.

At night, Atharva comes and Imlie smiles at him while holding a plate containing karva chauth items.

Imlie opens her fast by seeing Atharva’s face from the sieve and sprinkling water on the ground.

He feeds her sweets and drinks water from the kalash, opening her fast while looking into Cheeni’s eyes.

Imlie tells Atharva that she was alone till now but now she has a life partner for seven lives.

She promises him that she will support him at every step of his life.