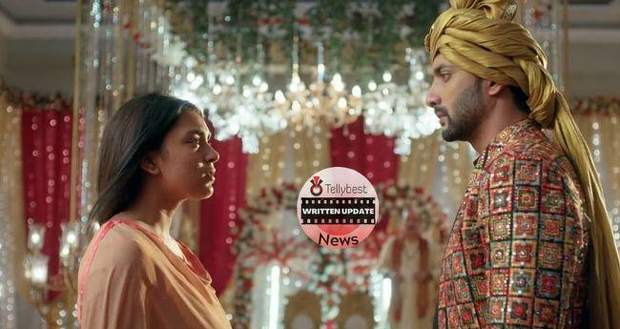 Meanwhile, Aryan teases Imlie to give him something and Imlie asks what does baby’s father wants.

Aryan puts his forehead on her and says he wants the baby’s mom only.

In pain, Imlie screams at Aryan “Billi ka Viah” (marriage of cat) and Aryan realises Imlie is in labour.

Panicked Aryan fumbles and gives water to Imlie but takes the glass from her hand and drinks it himself.

Imlie calms down Aryan by saying he handles world-class personalities and that he cannot be afraid of his child's arrival.

Calming down, Aryan screams for his family members and declares the baby is coming.

On the other hand, Anu sees Malini taking a sleeping pill and gets afraid.

Malini assures Anu that she is not taking her life, she just wants to sleep peacefully as tomorrow is a really important day.

Meanwhile, Malini assures Anu that Aditya's love became her weakness but now she is not so cowardly.

In the hospital, Aryan is panicking while Imlie is in the labour room.

At the same time, a piercing cry of a baby is heard and the doctor informs them that Imlie has given birth to a baby girl.

The Rathore family’s happiness has no bound and they enter the room hurriedly.

Later, Imlie introduces Cheeni to the baby but Cheeni interrupts her and talks cutely with the baby girl.

The next morning, Imlie and Aryan inform the family that they have decided to give Cheeni the Rathore family’s name.

Aryan declares that the baby girl and Cheeni will be called “The Rathore sisters”.

In Malini’s room, Malini wakes up after a sleep of 18 hours and Anu asks her if she’s feeling okay.

On the other hand, Imlie is expressing her gratitude to Sita Maiya’s idol for reuniting her and the Rathore family.

Imlie recalls and admires the coin her Dada gave her and tells her she will do anything for her mother and Dada.

Anu suggests Malini shift abroad with her but Malini informs her that she needs to finish her current chapter of life to start a new one.

Hearing Malini’s words, Anu gets scared and what she’s going to do and Malini with a psychopath smile says she will exit AryLie's life with a bang.