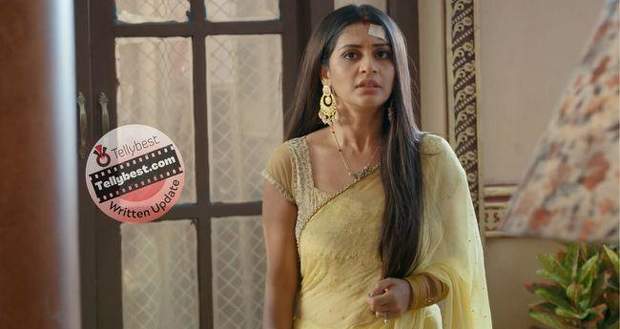 Today's Imlie 17th December 2022 episode starts with Atharva calling Cheeni and asking her why she didn't come to meet him in jail and if she is upset.

Cheeni tells Atharva that she is tired of waiting for him and that she is giving up on him.

Meanwhile, Imlie is walking towards her room with Atharva while rehearsing how to ask him if he loves her or not.

On the other hand, Atharva tries to convince Cheeni by telling her that he and Imlie are only friends.

Imlie reaches the door and hears Atharva saying that he loves her and gets happy thinking he is talking to her.

However, when she crosses the door, she realizes that Atharva is talking to someone on call.

Atharva tries to convince Cheeni by saying that he loves only her.

Imlie's steps falter as she turns and leaves the room asking herself if Atharva is in love with someone else.

She tries to convince herself that Atharva must have said it to one of his friends and puts on her brave face to ask him that question.

However, as she enters the room again, she hears Atharva say that Imlie is a nice girl but that he does not love her.

Atharva keeps on trying to convince Cheeni while Imlie runs away from there with the shards of her broken heart.

Atharva tells Cheeni that he thought it was Imlie and tells her that he wants to inform Imlie about them properly.

Imlie walks on the road remembering all her moments with Atharva when she thought they were falling for each other.

Abhishek's car is about to hit Imlie. He gets out and starts getting angry at Imlie but stops as soon as he sees Imlie's teary-eyed face.

He takes her to the side and asks her if she's okay and if she needs water or something.

Imlie is lost on her own while Abhishek goes and brings water for her.

Back at the Rathore house, Arpita and Rupy get shocked to see Cheeni happily humming and getting ready to meet Abhishek.

Cheeni boasts about Abhishek's money and tells them that she is saying yes to Abhishek because of his bank balance only.

Meanwhile, Imlie thanks Abhishek and apologizes to him for troubling him.

He offers her a ride home and gives her advice while Imlie tells him that she will have to walk on this journey alone and thanks him for the help.

On the other hand, Cheeni is waiting for Abhishek at a high-class restaurant while Atharva comes there to talk to her.

Cheeni talks to him rudely saying that she is tired of his helplessness and his cowardness which is why she is breaking up with him.

Atharva tries to convince Cheeni but she tries to leave as he's creating a scene.

Atharva holds her hand and stops her saying that she is the hook line of his life and that he fell in love with her at first sight at his event.

However, Cheeni degrades him as she calls him a useless boy, and leaves from there while her bracelet falls off her wrist.

Atharva holds the bracelet and walks without a destination as he recalls Cheeni's words.

© Copyright tellybest.com, 2022, 2023. All Rights Reserved. Unauthorized use and/or duplication of any material from tellybest.com without written permission is strictly prohibited.
Cached Saved on: Wednesday 25th of January 2023 01:01:28 PMCached Disp on: Thursday 9th of February 2023 04:20:36 AM