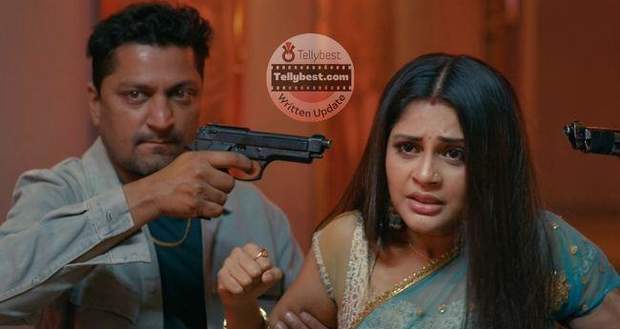 Today's Imlie 17th January 2023 episode starts with Rupi and Arpita rushing towards their home and calling the fire brigade while informing them that two members are still inside the burning inside.

Cheeni and Anu also arrive there and Rupi-Arpita gets glad seeing Cheeni while she asks them about Sundar.

Arpita reveals that Sundar did not come with them and is actually inside which scares her.

She starts panicking while Anu takes her aside and taunts her asking why she is getting scared by the fire she caused herself.

Cheeni removes her hand from Anu's grip and tells her that Sundar is her family while Anu states that small sacrifices in their plan are okay.

Cheeni is worried for Sundar

However, Cheeni goes away from her stating that her fight is with Imlie, not the rest of the family.

Just then, Imlie and Atharva arrive there and Cheeni rushes to Arto telling him to do something since Sundar is inside.

Imlie starts going towards the neighbors who are wetting the towels and takes them from them while Atharva takes one too and enters the burning house with Imlie.

She gets surprised to see him while Atharva tells her that he was not going to let her go inside alone.

They start using the wet towel to diminish the small fire in their way as they go to Sundar's room.

Imlie and Atharva start helping Sundar get out of the house while Imlie stops him midway and tells him to go ahead with Sundar as she is back with them in a second.

Atharva argues with Imlie and Imlie and Sita Maiyaa's bond

However, Atharva argues that he won't leave her inside alone but stops as Imlie tells him to obey her for the sake of their friendship.

Atharva reluctantly nods and tells Imlie to come fast as he goes towards the exit door.

Meanwhile, Imlie goes towards the temple and takes the statue of Sitaa Maiyaa and states that she is the most important member of the family.

However, halfway, Imlie starts fainting due to carbon intake and falls unconscious.

Meanwhile, on the outside, the Rathod family is taking care of Sundar while the fire brigade comes there and asks them if anyone is inside.

Arpita cries that Imlie is inside while Imlie comes out of the house while holding the statue in her hands.

Rupy and Arpita rush to her and take the statue from her while asking her if she is okay.

Atharva asks Imlie if he was scared she would not come out of the house.

However, Imlie looks at the statue and smiles as she says that she was not alone inside.

Flashback shows Imlie falling unconscious while the chandelier from the ceiling falls.

The tiny trident from the statue flies up and touches the fire alarm which starts spraying water.

Imlie wakes up due to the water sprinkling and the flashback ends.

Later, the doctor checks Imlie and Sundar stating that there are only minor scars/burns which will fade away in no time.

Further, Anu starts her plan as she asks the Rathod family about where they will stay since they have to prepare for Cheeni's wedding too.

Shivani tells Anu that they can stay with her while Anu makes an excuse that her house is being constructed.

Arpita suggests living in their farmhouse but Rupy reminds her that the commute will be too difficult with the city's traffic.

Abhishek tells the Rathod family that they can stay with him while Arpita tells him that just his offer is more than enough.

Imlie feels apologetic as she thinks that she cannot offer them due to Atharva and Rudra.

Just then, Atharva offers them to stay in the Rana house and convinces them while telling Imlie that he is not as good as her but he is not a bad man either.

Imlie smiles while Atharva tells Rudra and Devika to convince them too.

Later, Imlie wonders if Atharva asked her family to stay back for her or Cheeni while she scolds herself for doubting him.

On the other hand, Atharva worries hoping that Imlie doesn't feel he did it for Cheeni, and thinks to tell her about Cheeni's message so that there is nothing hidden between them.

They both bump into each other and get anxious as Imlie thanks him for telling her family to stay at the Rana house.

Meanwhile, Atharva unknowingly calms her insecurity as he tells her that he did it only for her.

Further, they both start talking about random things due to nervousness while Imlie drops her phone.

They both get down to get the phone but bump their heads in the process.

Imlie gets away and feels her emotions swirling while Atharva picks up the phone and hands it to Imlie while getting closer to her.