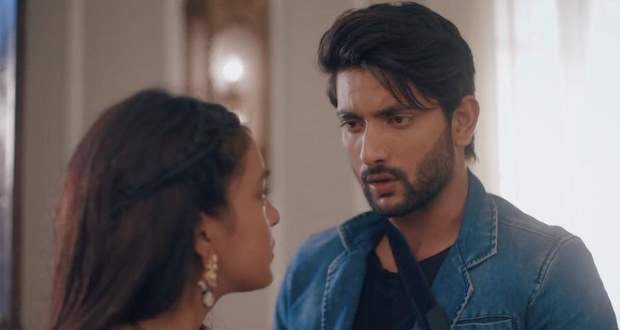 Today's Imlie 17th May 2022 episode starts with Imlie redoing the food for Arpita and Narmada as it's too spicy for them.

Jyoti comes there and talks to her asking if she isn't angry at them due to the humiliation.

Further, Jyoti asks her if Aryan loves her or not and if she likes Aryan to get a reaction out of Imlie.

Imlie gets flustered and says that she hasn't thought about it after which she goes to Narmada's room.

Imlie tries to convince Narmada to eat but is instead heavily insulted by her leaving her sobbing.

Meanwhile, Aryan sees everything from the window and is about to go to comfort Imlie when Arpita drags him away.

Getting angry at Arpita, Aryan scolds her while she makes him realize that he loves Imlie.

Arpita advises her that he should convey her feeling to Imlie as soon as possible as she is in dire need of support right now.

Later, Aryan sees Imlie folding clothes from out of the room and is about to go inside when Jyoti drags her away.

Jyoti makes Aryan tell her what's wrong while he reveals that he wants to confess to Imlie and tells Jyoti to help her.

Aryan leaves there happily while Jyoti thinks that she should be the only person whom Aryan should confess to.

The next morning, Aryan wakes up and watches Imlie mesmerized who has just showered.

He gets hit by the water from Imlie's hair and recalls the past when the same thing happened.

Feeling entranced, Aryan follows Imlie around and bumps into her when she suddenly turns around and doesn't notice him.

Imlie goes to the temple and prays while Aryan stands behind her and tells God that he wants to be introduced as Imlie's husband for a lifetime.

He thinks that he will surely confess to Imlie and asks God for a sign.

Taking it as a sign, Aryan smiles while Imlie thinks that something is wrong as he hasn't scolded her once since the morning.

To download Imli all episodes or watch Imlie today's (17 May 2022) latest full episode, go to hotstar.com