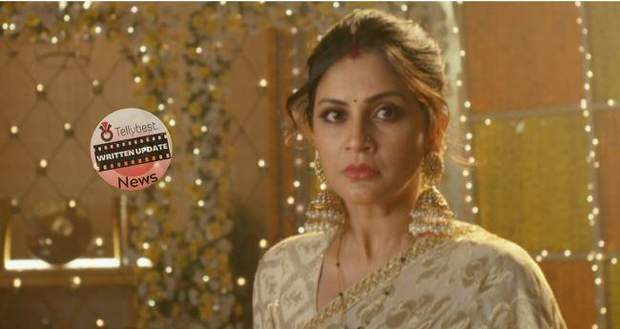 Today's Imlie 17th November 2022 episode starts with Imlie telling Cheeni that she is going with her to Rathore House to take care of her.

She helps Cheeni walk out of the house while Atharva rolls the luggage to the car.

Suddenly, Cheeni lies that she forgot her wallet inside so both Atharva and Imlie go inside the house to find it.

Meanwhile, Jatin's car arrives and Cheeni goes with him thinking that Imlie will take her back to Rana's house herself.

Later, Atharva and Imlie get shocked to see Cheeni gone and call out her name.

The whole family gathers in the parking lot and Rudra thinks that Cheeni is planning something vicious.

In Jatin’s car, Cheeni switches off her phone and takes Jatin’s phone with a facade to switch it off but sends a message to Atharva.

In the parking lot, Atharva sees a message from an unknown number which states that he has kidnapped Cheeni.

Atharva declares that Cheeni is kidnapped while Sundar, Arpita and Rupi reach there.

Afterwards, Rudra assures Imlie to be patient and advises her to think logically.

He points out how can Cheeni be kidnapped in the broad daylight and he advises Imlie to keep the courage to search for the truth.

Listening to Rudra’s advice, Imlie promises him that she will catch the culprit and punish him at any cost.

On the other hand, Cheeni persuades Jatin to stop in front of a ruined hut and live there for some time as everyone will search the hotels for them.

Cheeni fools Jatin that she has eloped with him and in reality, she is just using him for making a space in Rana's house.

On the other hand, Imlie and Rudra try to search for Cheeni and Imlie uses Bhaskar Times informants to check the CCTV footage of nearby signals.

The informant shows Imlie a car which is 3-4 km away from them and seems like the kidnapper's car.

Imlie sits in the car and diverts the car while Rudra tries to stop Imlie as they are not sure about Cheeni’s location.

Rudra and Imlie stop in front of the ruins and go to search for Cheeni there.

Later, Rudra sees Jatin putting a necklace on Cheeni’s neck from a torn part of the hut.

Rudra thinks he needs to reveal Cheeni’s evil face to Imlie and intentionally give her the pain of her life.

However, when Imlie and Rudra barge inside the house Cheeni acts like a victim and frames Jatin for her abduction.

Seeing Cheeni’s shredded clothes Imlie picks up a stick and beats Jatin while he tells Imlie that he is innocent.

At the same time, Atharva runs into the hut with the police and beats Jatin for hurting Cheeni while she screams fakely.

Police officers take away Jatin and Imlie confronts Rudra saying that Cheeni will never make a joke about her dignity.

Back in the Rana house, the Rathore family meets Cheeni with tears and assures her that they will take care of her.

However, Imlie exclaims that everything happened because of her so she will keep Cheeni in her house until her wounds heal.

© Copyright tellybest.com, 2022, 2023. All Rights Reserved. Unauthorized use and/or duplication of any material from tellybest.com without written permission is strictly prohibited.
Cached Saved on: Monday 21st of November 2022 03:37:09 AMCached Disp on: Monday 5th of December 2022 12:47:34 AM