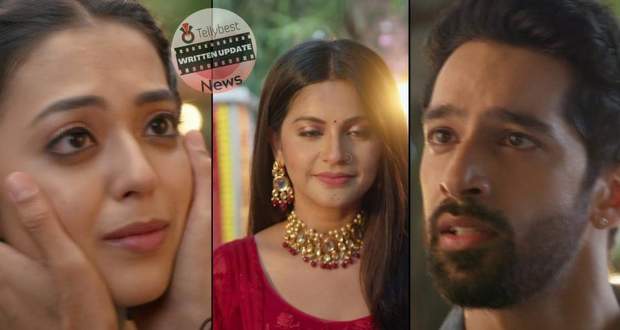 Today's Imlie 17th October 2022 episode starts with Cheeni telling Anu about her worries about Rudra kicking Atharva out if she marries him.

Cheeni is afraid that she is going to lose Rana’s property.

However, Anu suggests that she traps Atharva in her love and his family will accept them after some time.

At the same time, Rupi confronts them and calls Anu shameless for suggesting that Cheeni snatch Atharva from Imlie.

Cheeni exclaims that Atharva loves her not Imlie but Rupi does not believe her as he will tell Imlie the truth if that were the case.

Later, Rupi decides to talk to Arpita and Sundar before Cheeni does something stupid.

In Rana’s family, Kia and Akash tell Rudra about Atharva’s confession to Cheeni and how that stopped him from telling the truth to Imlie.

Rudra gets impressed by Akash and prays to god to give Atharva some brains.

In Atharva’s room, he admires Shaiyra’s poetry (Imlie’s Poetry) and thinks Cheeni is the one who wrote those lines.

Atharva says he fell in love with Cheeni because of her poetry back at the concert.

On the other hand, Imlie is drawing her and Atharva's picture but Cheeni crashes into her and smears paint on the canvas.

However, Imlie assures her that no one can erase Atharva’s name from her life.

Later, Atharva and Cheeni meet in a cafe and she makes excuses for not telling the truth to the family.

She plays the victim card and accuses the Rathore family of not giving her the Rathore name.

Cheeni cries and blackmails Atharva into submission and asks for some time.

Moved by Cheeni’s words, he gives her time to tell everyone the truth before any new ritual happens.

Later in the home, Cheeni gets a transfer letter from her job and Imlie gets upset as Cheeni is going just before her marriage.

Meanwhile, Rupi recalls Arpita, Sundara and her planning to keep Cheeni away for Imlie’s sake.

However, Atharva who is standing at the door declares that Cheeni will not go anywhere and Cheeni gets scared that he will tell everyone the truth.

However, Cheeni reasons she cannot leave before Imlie’s marriage and Imlie thanks Atharva for his kind gesture.

Atharva says he is going to do everything for Imlie's happiness only as her happiness is connected to Cheeni’s.

Innocent Imlie does not understand Atharva’s hidden meaning behind his words while he is standing hurt because of Cheeni’s behaviour.