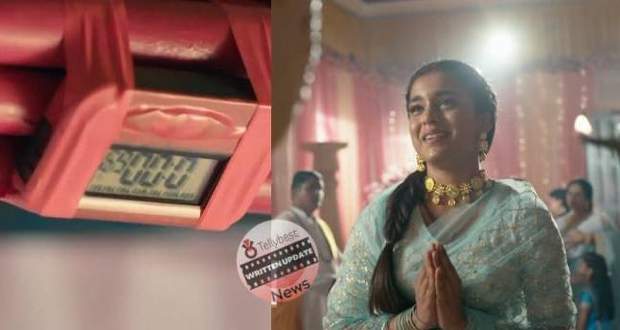 Later, Aryan and Imlie sit in the puja and Malini enters the house.

Seeing Imlie worried, Sundar teases her and goes to check on everything.

At the same time, Malini takes out the 3 bombs from the fruit basket and plants them under 3 tables.

However, Sundar sees Malini and confronts her but the woman was someone else and goes to assure Imlie that everything is alright.

At the same time, Malini crashes into a stranger and the bombs get activated accidentally.

Before Aryan and Imlie can give a name to Cheeni and the baby girl the one bomb explodes.

Everyone starts to run and Malini falls on the floor injured and AryLie runs to find Cheeni after sending Narmada, Sundar and Arpita out.

Meanwhile, Imlie sees Cheeni sitting near the idol and holding the baby tightly in her arms scared.

However, another bomb goes off and Imlie falls from the impact and sees Cheeni and the baby are alright.

Imlie gives the baby to Aryan and holds Cheeni’s hand but they get separated after a stranger crashes into their hands and breaks their bond.

Cheeni falls on Malini and tells her she is not her mother but a bomb goes off on the other side.

A police officer saves Cheeni and then another bomb goes off.

Later, Aryan and Imlie's bodies are trapped under a pillar and after some time they gain consciousness.

Bleeding with agonizing pain, Aryan teases Imlie for taking his conversation about taking their last breath together too seriously.

At the same time, injured Malini tells Cheeni that Imlie never loved her and she only kept her because Imlie had no baby.

On the other hand, Narmada, Sundar and Arpita get shocked to see AryLie's state and try to move the pillar.

However, Aryan holds Narmada’s hand and requests her to name their baby Imlie.

Meanwhile, Malini tells Cheeni to never forget that Imlie stole her and never supported her in bad times.

Malini requests Cheeni to promise her that she will snatch her rights from the world and raises her bloody hand.

However, shocked Cheeni puts her hand in Malini’s hand and sees Malini’s soul leaving her body.

On the other hand, Imlie expresses her love to Cheeni and assures Narmada that Cheeni will take care of junior Imlie.

Just then, both Aryan and Imlie say goodbye to their family and take their last breath in each other's arms.