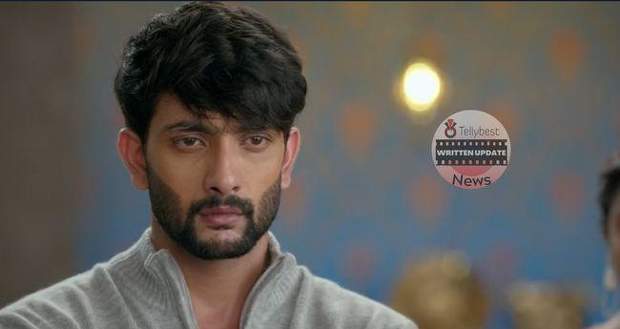 Today's Imlie 18th August 2022 episode starts with Imlie getting to know the truth about Aryan selling half of his shares of Bhasker Times to Malini.

Arpita informs Imlie about Aryan's situation and requests her to take over Bhasker Times as Aryan is not in a position to even handle himself.

Narmada informs Imlie about the events that happened five years ago and tells Imlie she can go if she wants.

Imlie exclaims she needs to go and takes Cheeni’s hand and walks out of the house where Malini and Anu are standing.

Seeing Imlie Malini smirks while Narmada requests Imlie to stay back through her eyes.

Malini stops Imlie and gives her a ticket as a farewell gift while Imlie insults Malini for giving her a ticket despite trying to save Bhasker Times and the worker's source of income.

Furious, Imlie tears the ticket and slaps the ticket's shreds on Malini’s face.

Imlie confronts Malini saying she will save Bhaskar Times and declares her re-entry into Rathore's house.

Narmada, Sundar, Arpita and Cheeni hug each other happily while Cheeni goes to play hide and seek with Jaggu.

Neela and Gudiya see Imlie’s return with distaste while Malini tries to instigate Narmada against Imlie by reminding her of past events.

Arpita insults Malini for instigating Narmada against Imlie while Aryan interrupts the conversation and takes Imlie aside and orders her to go.

Narmada confronts Aryan saying that she will decide who can live in her house.

Aryan informs Imlie that he is going to hate her always and Imlie tells Aryan that she is going to repair the broken wires between them.

Imlie orders Malini and Anu to make their way to their home while Imlie takes her family members into the house and closes the door on Malini and Anu's faces.

Anu warns Malini about Imlie winning Aryan's hearts but Manini says she is going to do anything to stop Imlie from making her place in Aryan’s hearts.

Aryan comes from behind and tells Imlie that this anklet reminds him of the destruction of his family.

At the same time, Cheeni prays to god to stop Imlie and Aryan’s fight while Narmada and Arpita assure Cheeni about Aryan and Imlie's sweet and sour relationship.

Aryan informs Imlie she has nothing left now as everything was finished five years ago.

© Copyright tellybest.com, 2020, 2021. All Rights Reserved. Unauthorized use and/or duplication of any material from tellybest.com without written permission is strictly prohibited.
Cached Saved on: Saturday 1st of October 2022 10:57:03 PMCached Disp on: Sunday 2nd of October 2022 12:18:11 AM