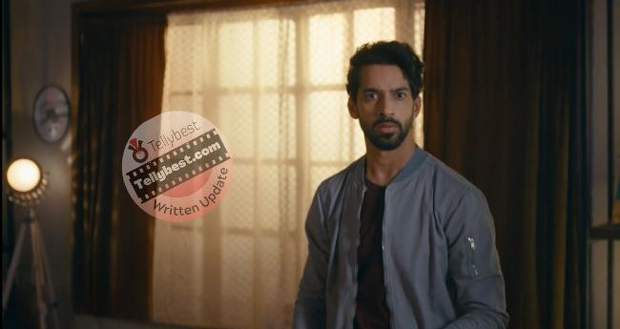 Today's Imlie 18th December 2022 episode starts with Atharva feeling empty while he sees Imlie on the road and goes to her.

He sits down beside her and asks her why she's roaming on the road.

However, she does not reply and sits on a bench while he asks her if she's okay.

He puts his hand on her shoulder but she pushes it away and tells him to not even talk about love.

He tells her that he is irritated too with love and does not want to talk about it.

Atharva addresses her as his friend while she tells him that she lost her heart and he does not even care about their friendship.

He holds her by the elbow and tells her that they should go home.

Imlie says that she knew how to walk alone and will learn again as she walks away from there.

Meanwhile, Cheeni waits for Abhishek at the restaurant while he comes there with a gift for her.

She asks him why he was late and he informs her about a girl (Imlie) who was just about to get hit by his car but he stopped at the right moment and then helped her.

Cheeni seems uninterested but gets shocked as he brings out the jewelry box containing a beautiful necklace from the gift bag.

Cheeni gets excited seeing the jewelry while she lies saying that it is hard to find people like him who help strangers.

Cheeni tells him that they will go on many more dates and that it is a yes from her.

Later, Cheeni is leaving the Rana house when Rudra stops her and mocks her saying that a huge problem is leaving from their house.

However, Cheeni ignores him and leaves from there without giving any answer.

As she exits the main door, she sees Imlie walking towards the house with an upset mood.

Imlie sees Cheeni and asks her why she's going.

Cheeni tells Imlie that Rupy and Arpita have chosen a guy for her and she has also agreed as they all pester her to settle down.

Imlie hugs Cheeni and hides her tears as she tells her that she wishes God will even give her part of the happiness to her.

Cheeni's cab arrives and she starts entering the car when Atharva comes there and tries to stop her.

However, Rudra tells him to let Cheeni go and make her own decision.

Cheeni leaves while Atharva tells Imlie that she has been acting different too and asks her if she would like to talk.

Imlie goes inside and Atharva leaves to drive away in his car.

However, the bracelet of Cheeni that Atharva had picked up drops and Imlie gets a hold of it.

Meanwhile, Cheeni realizes that her bracelet is gone and she tells the driver to take a U turn knowing that Atharva must have picked it up.

Imlie wonders whose bracelet it is while Cheeni comes there.

Imlie hides the bracelet so as to not trouble Cheeni with her problems while Cheeni also just hugs her and leaves.

Later, Imlie comes to Atharva and he gets glad that she at least talked to him.

She asks him if he has something to tell her and talks about all the times when she did grand gestures to confess her love for him and other things telling him that he should have told her then.

Atharva asks her what she's talking about while she reveals and tells him that she overheard him on the call and knows that he does not love her.

Imlie cries as Atharva gets shocked and tries to convince her while she tells him that he trampled on her heart.

She asks him if he did not even understand her in all this time and tells him that she would have happily freed him from the marriage had she known that he loved someone else.