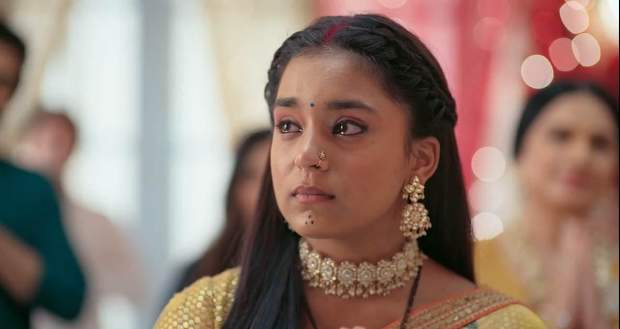 Today's Imlie 18th July 2022 episode starts with Imlie being admitted to the hospital for treatment after she falls down.

The entire family is in the hospital and they’re all numb from the shock of what happened.

Aryan goes and lies down in Narmada’s lap while she keeps asking him about Imlie’s health.

Aryan keeps stuttering and isn’t able to say anything.

He says that if something happens to Imlie or Chiku, he won’t be able to do anything.

At that time, the doctor comes and tells Aryan that they weren’t able to save the baby.

Unable to process the shock of this news, Narmada falls down on her knees and Aryan keeps staring in horror.

Meanwhile, Malini is in her room holding the bottle of sindoor that Imlie gave her, saying that she will also steal her love as Imlie stole hers.

Anu raises a glass of champagne to Malini asking if Malini won’t celebrate today, to which she says she will celebrate today with her child who helped her get where she is today.

When Imlie wakes up after the operation, Aryan enters the hospital room and watches Imlie crying alone.

He leans against the window and is not able to stop his tears when Imlie notices him.

They both keep staring at each other without saying anything.

Arpita enters the room along with Sundar and Narmada and they all start to console Imlie and Aryan.

Meanwhile, Malini gets to know about Imlie’s child passing away and says to Anu that today is the first time her head is not aching from little Gudiya crying.

Aryan takes Imlie’s hand and walks her out of the hospital and takes her home.

They both go directly to their room without speaking to the family even once.

They get emotional looking at the toys in the room and they both shout at the same time at each other.

They’re both blaming each other for Chiku's death.

Aryan says he’s now faced death for the third time in his life and Imlie had promised him that she won’t let him go through this ever again.

He cries saying that Imlie broke her promise and asks her why she ruined his future.

Imlie says that she did not do this intentionally but Aryan lashes out at Imlie asking why she ran on those stairs despite him telling her not to.

Aryan says no mother who cares for her child would have done that and he accuses her of loving little Gudiya more than her Chiku.

He says that Imlie loves little Gudiya more because she is Aditya’s child.

© Copyright tellybest.com, 2020, 2021. All Rights Reserved. Unauthorized use and/or duplication of any material from tellybest.com without written permission is strictly prohibited.
Cached Saved on: Monday 3rd of October 2022 04:07:39 AMCached Disp on: Wednesday 5th of October 2022 06:35:27 PM