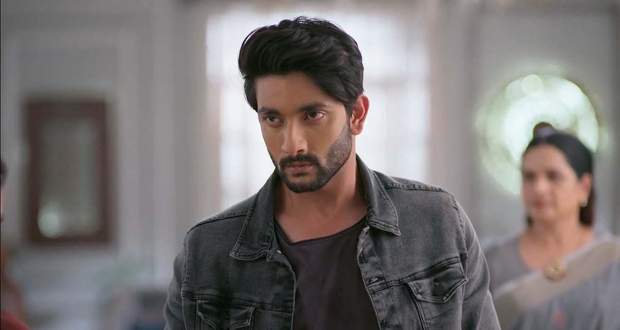 Just then, Gudiya comes there and Imlie uses her as a distraction to sneak out of there.

Meanwhile, Jyoti gets taken to the hospital by Harry.

Elsewhere, Keri (Imlie) goes to Aryan and asks for his car thinking that she can go to the hospital while Aryan comes there too and refuses to give her the keys.

Imlie further makes Aryan get out of the car and later runs away with the car.

Aryan goes inside and keeps shouting for Imlie to complain about Keri while Sundar gets worried wondering how he will handle the situation.

However, Arpita comes to Sundar dressed as Imlie while Aryan tells her to come to talk to him later.

Back at the hospital, Imlie is denied entry as she's in the disguise of Keri.

Imlie tries to sneak inside but the guards stop her as the receptionist tells them to lock her up until Imlie arrives there.

At the same time, Harry brings Jyoti to the hospital and runs away from there to not get involved with Jyoti.

A doctor notices Jyoti's unconscious body and takes her for treatment while Jyoti sees that her room is adjacent to Madhav and thinks to kill him before he exposes her.

Meanwhile, Imlie tries to convince the guards that she is Imlie but they refuse and leave to guard the hospital.

Imlie thinks that at least she knows that Madhav is safe as no one is going near him.

Meanwhile, Jyoti thinks to use Harry for killing Madhav and asks the doctor about her husband, Harry.

However, the doctor informs her that he found her alone which angers Jyoti as she realizes that Harry ditched her there.

© Copyright tellybest.com, 2022, 2023. All Rights Reserved. Unauthorized use and/or duplication of any material from tellybest.com without written permission is strictly prohibited.
Cached Saved on: Monday 21st of November 2022 11:12:10 AMCached Disp on: Friday 2nd of December 2022 02:24:59 PM