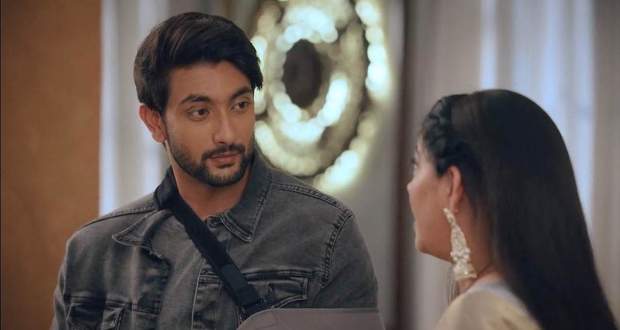 Today's Imlie 18th May 2022 episode starts with Aryan shouting for Jyoti and telling her that he has done all the preparation for the date.

Jyoti calms Aryan's nervousness by joking with him and reassuring him that his plan will be a success.

Later, Gudiya tries to ruin Imlie's outfit for the date when Jyoti stops her and says that she is meddling with her huge plans.

Just then, they hear the sound of the doorknob turning and hide behind the headboard of the bed as Imlie enters the room.

Imlie reads the letter from Aryan and gets elated while Gudiya and Jyoti sneak out.

Later, Narmada gets influenced by Neela's words against Imlie and is about to stop their date when Arpita comes there and speaks in defence of Imlie.

Just then, Jyoti comes there and calms them saying she is willing to check on the couple during their date.

Elsewhere, Imlie and Aryan excitedly get ready for going out and leaves while Narmada is still upset with Imlie.

However, upon stopping in the middle of the jungle, Imlie gets skeptical as Aryan stops and takes her out saying that he promises she is going to love the surprise.

They reach the beautifully decorated tree house and Imlie gets amazed at its beauty while Aryan admires Imlie's cuteness.

Imlie climbs up the treehouse and tells Aryan why he did such romantic things for her.

Aryan also climbs the treehouse and tells Imlie that she is very special to him and comes closer to Imlie's face.

At the same time, Jyoti stands under the treehouse with a saw (to cut the tree) in her hand.

To download Imli all episodes or watch Imlie today's (18 May 2022) latest full episode, go to hotstar.com