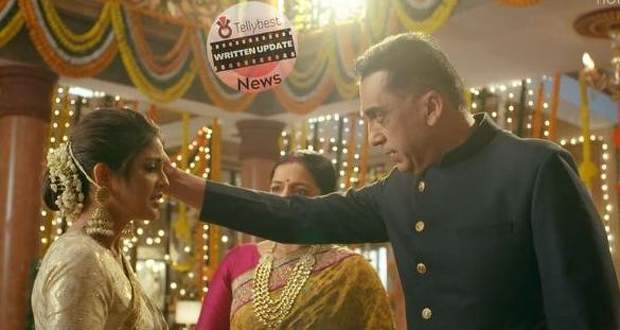 Today's Imlie 18th November 2022 episode starts with Cheeni laughing as she thinks that the whole Rana will be hers soon.

Further, Cheeni calls Atharva and gets angry when he cuts her calls.

Atharva gets worried while talking to an event planner about his new gig and calls Cheeni once their talk is done.

However, Cheeni tells him that she does not care about his music and just wants him to come and meet her.

Atharva feels discouraged as he disconnects the call and starts walking toward Cheeni's room.

However, he bumps into Imlie on the way who excitedly asks him about the call with the event planner.

Atharva tells her that he has to send the samples by the next day and she gets excited for him.

Meanwhile, Atharva recalls how differently both Imlie and Cheeni reacted to the news and tells Imlie he will take a stroll to clear his head.

Atharva goes to Cheeni and tells her that he is not going to come to her room as he doesn't want their relationship to be something that is done when everyone is asleep.

Atharva leaves while Cheeni looks at his retreating figure with anger.

She smiles as she removes the curtains and shows him the new studio that she has gotten made for him.

He gets surprised and thanks her while telling her that he had a lot of listeners till now but she is the first one to support him.

Imlie gets flustered as she tells Atharva to not thank her and dedicate his next album to her as a reward.

Just as they joke, Cheeni comes there telling Imlie that she wanted to sleep in their room as she is having trouble sleeping.

However, Imlie tells her that she cannot sleep there as Atharva is going to work on his demo.

Further, Imlie and Cheeni go to Cheeni's room while Cheeni thinks that she will soon own the room with Atharva.

Later, while in bed, Cheeni teases lmlie as she tells her that she got very close to Atharva in a short time and felt honeymoon vibes coming from the room.

When Imlie asks her for advice, Cheeni is fallen asleep by that time.

Imlie goes to give Atharva a cup of coffee and asks him about the progress of the demo.

Imlie gets excited as she hears the demo and praises him as she sits to talk with him.

Atharva has a heartfelt conversation with Imlie and reveals to her that his inspiration for music was Rudra who used to sing him lullabies when he was a child.

On the other hand, Cheeni gets angry seeing Imlie not in the room and goes to spy on them.

Seeing Imlie and Atharva talking sweetly to each other, Cheeni gets jealous and goes to the kitchen to conjure up a drama.

Later, the Rana family rushes to the kitchen after hearing a crashing sound and gets shocked to see Cheeni on the ground with a broken glass jug nearby.

© Copyright tellybest.com, 2022, 2023. All Rights Reserved. Unauthorized use and/or duplication of any material from tellybest.com without written permission is strictly prohibited.
Cached Saved on: Monday 21st of November 2022 05:57:35 AMCached Disp on: Monday 5th of December 2022 12:46:53 AM