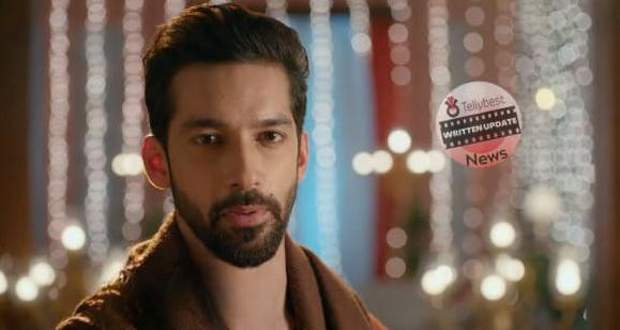 Today's Imlie 18th October 2022 episode starts with Imlie persuading her family to not send Cheeni away.

Hearing the positive decision, Atharva takes his leave while both Imlie and Cheeni look at him lovingly.

Arpita sends Imlie to send Atharva home and she runs out happily.

Meanwhile, Cheeni walks towards Rupi and warns Cheeni that she will keep her eye on her.

In the car, Atharva's car engine is not starting and Imlie asks for his car’s keys.

Reluctantly he gives her the keys and comes out of the car while Imlie takes his seat.

She says a poem on patience and tells Atharva to try to start the engine now.

Atharva starts the car while Imlie is sitting so close to his body.

He teasingly says it's a coincidence and she compares the car engine to love.

Hearing Imlie’s talk, he asks her if she will support Cheeni in every situation but she says she will only support the truth.

Later, he asks her about the poetry but she lies about reading it somewhere and he thinks she read it in Cheeni’s diary.

In Rana’s house, Kia and Akash are happy as Rudra is favouring him over Atharva.

Akash tells her that he will instigate both Atharva and Rudra against each other and snatch their property.

At the same time, Kia sees Atharva standing on the other side of the railing.

She signals Akash and he says that he wants Atharva to marry Cheeni as he loves her but Rudra will not agree.

However, Atharva informs them about his plan of telling Imlie the truth before the mehndi function.

Later, Rupi, Arpita and Sundar are talking about doing Imlie's marriage without any obstacles.

Meanwhile, Anu instigates Cheeni against Rathore and tells her to snatch Atharva from Imlie.

Cheeni tells she does not want to destroy Imlie’s fate but Anu manipulates her against Rathore’s.

In the mehndi function, Imlie takes Narmada’s blessing and gets emotional remembering her father and mother.

Meanwhile, Meethi enters the house and both Cheeni and Imlie get happy and recall their precious moments.

Meethi opens her arms and hugs them tightly and she says she has come here to meet Atharva.

She teases Imlie and asks Cheeni about Atharva but she changes the subject.

Cheeni thinks she can lie to anyone but not Meethi while everyone meets Meethi happily.

Meanwhile, Anu glares towards Meethi while she greets her out of respect.

Later, Anu puts out her leg and a waiter stumbles and crashes into Meethi and Imlie.

Sundar supports Meethi while Imlie falls but a hand hold her hand saving her.

© Copyright tellybest.com, 2022, 2023. All Rights Reserved. Unauthorized use and/or duplication of any material from tellybest.com without written permission is strictly prohibited.
Cached Saved on: Monday 21st of November 2022 06:19:36 AMCached Disp on: Saturday 10th of December 2022 01:43:24 PM