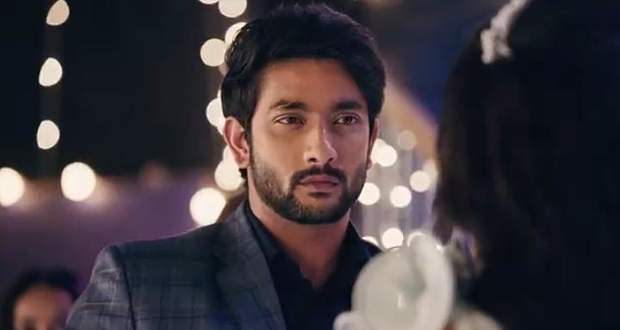 Today's Imlie 19th April 2022 episode starts with Aryan telling Imlie that he knows she married him due to Mithi and tells her that she doesn't have to tell him anything.

Aryan tells Imlie to not come after him and give him hope which confuses Imlie.

Aryan leaves from there while Imlie holds herself back from stopping Aryan and cries after he leaves.

Aditya comes to Imlie and gives her advice to go after Aryan seeing Imlie emotional.

Aditya reveals that he is going to Australia as he has gotten accepted for a job there and bids goodbye to Imlie.

Aryan and Imlie are walking on the road as they both feel empty remembering their memories with each other.

Aryan cries while Imlie feels a tear coming onto her hands and thinks about Aryan.

Later, Aryan tries to distract himself with work when Arpita comes there and questions him about the possibility of Imlie returning.

Arpita tells Aryan that Imlie has returned and he looks up from his laptop to see Imlie getting inside the house in a daze.

Aryan goes to talk to Imlie when her outfit gets stuck in Aryan's watch while Arpita records their cute moment.

Aryan and Imlie get into a childish argument while Arpita comes there and shows them the video.

Both Aryan and Imlie feel flustered seeing the video and leave in different directions.

Later at night, Aryan is changing his bandaids when Imlie comes there and sits next to him.

Aryan goes back to changing his bandaids when Imlie comes closer to his face and blows on his injuries leaving him stunned.

Aryan tries to make a small conversation and they both get down from near the window and sit facing the opposite direction with their backs touching each other.

Imlie questions Aryan why he left her with Aditya and reveals that Aditya is leaving the county and might never return.

Aryan thinks that Imlie is upset due to Aditya's departure and asks her if she is okay.

Imlie, who is silently weeping, removes her tears and tells him that she is not upset about Aditya's departure.