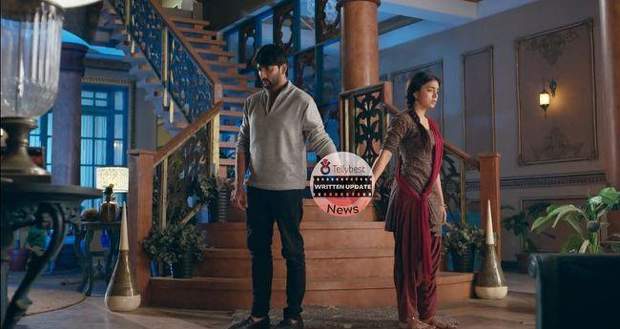 Today's Imlie 19th August 2022 episode starts with Imlie advising Aryan to preserve the anklet as now it’s going to be his only partner for a lifetime.

On the next morning, Imlie greets Narmada and Arpita while Imlie gets emotional when Arpita tells her she has prepared all her favourite dishes.

Meanwhile, Imlie reads the Bhaskar Times newspaper and picks out the mistakes and calls the newspaper rubbish.

Gudiya offers Aryan a glass of juice but he refuses and goes outside.

Meanwhile, Imlie assures Narmada that she is going to take Aryan to the office.

Neela warns Gudiya of being heartbroken after Aryan elopes with Imlie.

Gudiya informs Malini about Imlie taking Aryan to the office.

Aryans enter the car and order the driver to take him to ‘White Club'.

Seeing Harsh driving, Aryan recalls Imlie while she is driving the car and stops in front of the Bhaskar Times office.

Aryan yells at the driver but gets shocked seeing Imlie as the driver and gets out of the car furiously.

Imlie confronts Aryan to go into the office and not dwell in the sadness anymore.

Aryan yells at Imlie that she doesn’t know what pain he is going through every day.

Imlie confronts Aryan for not being the only one to face pain and death.

She tells him she knows the pain of being left and reminds Aryan of him respecting himself more than anyone.

Aryan listens to Imlie's encouraging words of moving on from the pain but feels moved when Imlie tells him that his work and workers need him desperately.

However, Aryan tells Imlie he has gone too ahead and will never come back and drives the car back home.

Meanwhile, Malini gets happy seeing the conversation between Aryan and Imlie from the window.

Jealous Malini gives money to Imlie to get coffee for the workers while Imlie informs Malini that she is an independent reporter.

Imlie conducts a meeting and informs everyone to cover the independence day event themselves.

In the Rathore house, Jaggu and Cheeni request Aryan to take them to see the independence day event dramatically with their puppy eyes.

Aryan tells the children to call the whole family.

Meanwhile, Malini has fitted a bomb in Imlie's mike which she has taken to the Independence event.