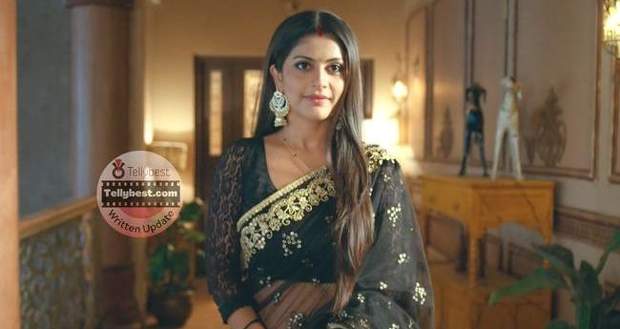 Today's Imlie 19th December 2022 episode starts with Imlie telling Atharva that she would have happily released him from their relationship if he had told her.

She asks him whether making her cry was necessary.

As a tear sheds from Atharva's eyes, Imlie wipes it away and tells him that she can bear her pain but not his.

Imlie confesses that he might not love her but she loves him from the start.

Atharva says what he can say and tells her that she is so strong that she is wiping his tears while she is in pain.

He tries to tell her that the girl he's having an affair with is Cheeni but she stops him mid-sentence and tells him that it is a part of his life.

She tells him that she is not alone as she has the pain from her parent's death and the betrayal that he has given her which will keep her company.

Swarming with emotions, Imlie says that this moment should be captured and ties a knot in her saree while Atharva requests her to not do it.

Atharva tells her that he does not deserve her tears while she looks into his eyes and tells him that she is the dumb one.

She moves away from him and tells him that she wants to go home.

Imlie tells him that she needs the love and support of people who really love her for her to pick up the pieces of her shattered heart, trust, and future.

Later, Atharva is driving to drop Imlie home when she sees an old lady trying to cross the road with futile results and tells him to stop the car.

She goes and takes the luggage from the old lady while Atharva also comes there and helps them.

Meanwhile, at the Rathod house, Cheeni is excitedly planning her wedding while Rupy jokes that she should wait for Abhishek's response first.

Cheeni arrogantly says that no one can reject her while Imlie and Atharva enter the house.

The family gets surprised by their arrival while Imlie tells the family that she is going to stay there for some days.

Arpita states happily that she'll prepare the room for them while Imlie says that Atharva is not going to stay as he has some work.

Later, Atharva calls Cheeni and tries to tell her about Imlie finding out the truth but gets shocked as she tells him that she has already found someone.

As the call disconnects, he says that he is the one to blame which is why he is getting all the pain and prays for less pain for Imlie.

On the other hand, Imlie cries as she vents her unsaid feelings and emotions to a frame of her mother while Sundar sees her from afar and realizes that something is wrong.

The next day, he tells Rupy and Arpita about it while Imlie comes there and reveals to them that Atharva does not love her but someone else.

© Copyright tellybest.com, 2022, 2023. All Rights Reserved. Unauthorized use and/or duplication of any material from tellybest.com without written permission is strictly prohibited.
Cached Saved on: Wednesday 25th of January 2023 01:20:46 PMCached Disp on: Tuesday 31st of January 2023 06:31:38 PM