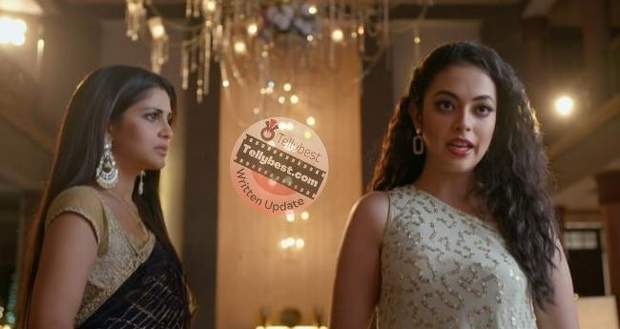 Today's Imlie 19th January 2023 episode starts with Atharva telling Imlie that he needs to tell her everything and talk about the 'I miss you' message that Cheeni had sent him.

However, he stops talking as he realizes that she has fallen asleep and tells her to not doubt him as nothing is more important to him than his friendship with her.

Just as he is about to go to sleep, he gets a call from Anu which he reluctantly picks up.

Anu apologizes for disturbing him this late and requests him to talk to Cheeni once as she thinks that Cheeni and Abhishek have had a huge fight.

Atharva reluctantly goes toward Cheeni's room and does not find her there after which he looks for her and finds her in the garden.

Cheeni acts upset and runs to hug Atharva but he stops her while asking if he should send Imlie or Rupy.

However, Cheeni refuses and cries to him that she said yes to Abhishek to get away from him and Imlie but now she is regretting it since Abhishek always shouts at her and scolds her.

Atharva tells her that she should talk to Rupy and leaves while Cheeni gets angry at her plan being failed.

The next morning, the family is having breakfast while Arpita apologizes as she states that she cannot eat Paranthas due to her high cholesterol.

However, Atharva brings fruit salad for her while Akash and Keya joke about her.

On the other hand, Imlie tells Cheeni that she is going for some important work and asks her if she wants to come along.

However, Cheeni refuses and gets happy as she thinks that she will get to talk to Arto.

Further, Atharva gets a message from Cheeni to help him and a location.

Atharva is reluctant to go and thinks to talk to Imlie first but realizes that she is not home.

He finally decides to go thinking that Cheeni might really need his help.

Meanwhile, Imlie arrives at the Rathod house and looks for evidence as she is sure that someone intentionally caused the short circuit to happen.

At the same time, Cheeni meets up with Abhishek at the tea stall and gets happy to execute her plan as she sees Atharva there.

She intentionally riles up Abhishek and makes him shout at her.

Atharva sees this and thinks that Cheeni is right but does not intervene.

He thinks to tell Cheeni's family about it first as they can help her better while she comes and stands by the side of the car.

Elsewhere, Imlie finds Cheeni's nail near the electricity box and gets suspicious of her, and thinks to question her afterward.

On the other hand, Cheeni starts her drama in front of Atharva and convinces him to give her a ride home.

Cheeni keeps on disconnecting Imlie's calls while Atharva calls Imlie but it shows that she is busy on a different call.

© Copyright tellybest.com, 2022, 2023. All Rights Reserved. Unauthorized use and/or duplication of any material from tellybest.com without written permission is strictly prohibited.
Cached Saved on: Wednesday 25th of January 2023 11:37:38 AMCached Disp on: Wednesday 1st of February 2023 08:44:41 PM