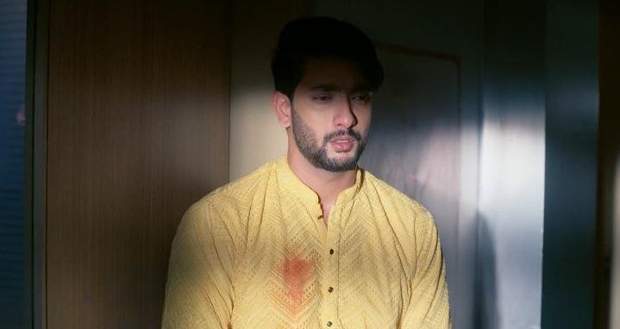 He lashes out at Imlie saying that she loves little Gudiya more because she’s Aditya’s daughter.

Imlie retaliates and says even if Chiku’s death was an accident, Aryan is responsible for it.

She asked him to never leave little Gudiya’s side but he didn’t listen to her.

Imlie lets out her anger and says that Aryan has questioned her love and motherly instinct today.

Their fight spirals even more and Aryan asks Imlie to leave him.

He pushes his fist into a wall in anger and his hand starts bleeding.

Imlie sees this and starts cleaning the blood out of his hands.

Aryan stops her and asks her to leave his hand because every time Imlie touches his hand, he’ll remember how her carelessness cost him his child.

Imlie walks out of the room and starts packing her clothes.

Arpita comes to see Imlie and hugs her tightly, asking her not to leave.

Imlie asks Arpita to take care of Aryan after she leaves and Arpita says she’ll talk to Aryan herself and prevent all of this.

Imlie stops her from doing this and she says that she won’t be able to stay here anymore.

When Sundar goes to talk to Aryan, he says to him that he accepts that Imlie made a mistake but everyone makes mistakes.

Meanwhile, Malini takes little Gudiya to a secluded godown and says to her that before Imlie came into her life, she had everything going good for her.

She starts crying and says to the child that she would have been a good mother to her if Imlie had not come into her life.

Malini says that she only wanted Aditya’s love but she couldn’t even get that.

She puts the baby in the crib and says to the baby that she needs to leave her life now.

While Neela and Gudiya celebrate Imlie’s exit from the house, they get a call from Imlie’s mother Mithi.

Mithi is worried about Imlie and Neela tells her that Imlie doesn’t live here anymore.

She asks to talk to Imlie once and questions if she’s okay but Neela says that Aryan has thrown Imlie out of the house.

© Copyright tellybest.com, 2020, 2021. All Rights Reserved. Unauthorized use and/or duplication of any material from tellybest.com without written permission is strictly prohibited.
Cached Saved on: Saturday 1st of October 2022 09:07:42 PMCached Disp on: Wednesday 5th of October 2022 06:34:44 PM