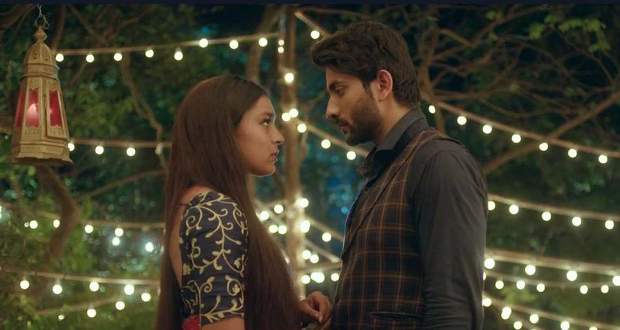 Today's Imlie 19th May 2022 episode starts with Imlie and Aryan standing in the middle of the treehouse and leaning closer to each other with the passing moment.

Imlie asks him what he wants to say romantically while Aryan again gets nervous and goes away from Imlie. He removes his tie and jacket and gathers the courage to express his feelings.

Thinking that Imlie is teasing him, Aryan whispers that she knows what he wants to express and that she is just pushing him to say it verbally.

Imlie gets emotional thinking that they are finally going to confess and goes toward Aryan while removing tears from her eyes.

Aryan takes Imlie's hand gently and starts dancing with her slowly as a way to express his emotions.

Aryan holds Imlie's face while she gets shy and leaves away from his arms.

Meanwhile, at the bottom of the treehouse, Jyoti cuts one bamboo of the support that is holding the treehouse up and leaves from there.

Just a few seconds later, the bamboo breaks, and Imlie is about to fall into the muddy water when Aryan holds her hand and tries to save her.

At the Rathore house, Sundar prepares Arpita's favorite food while Neela and Gudiya come there and mock him.

Back at the treehouse, Aryan sees his phone put to the side and thinks to push Imlie towards that so that she can call for help.

However, before he can do that, Imlie slips and falls into the pool while Aryan jumps after her to save her.

Just then, the treehouse also falls into the pool while Neela is trying to instigate Narmada against Imlie back home.

Aryan manages to find Imlie and brings her back to the side where he tries to get Imlie to wake up by doing compressions on her chest.

At the Rathore house, Neela and Gudiya confront Jyoti who reveals that Aryan and Imlie will be separated very soon.

Aryan hugs Imlie's unconscious body and begs her to wake up feeling guilty for the whole situation.

To download Imli all episodes or watch Imlie today's (19 May 2022) latest full episode, go to hotstar.com