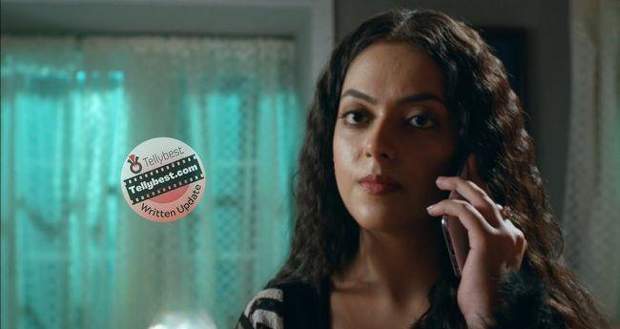 Cheeni acts innocent as she says that she was thirsty and decided to come to the kitchen on her own since Imlie was not in the room.

However, she lost her balance and fell waking everyone up.

Shivani taunts Imlie saying that she should have taken care of Cheeni while Atharva reveals that Imlie was helping him.

In the end, Imlie decides to stay with Cheeni while Atharva agrees and goes to his room.

The next morning, Keya brings fruit for Cheeni and tells her to keep gracing her with her cleverness and get Imlie out of the house.

On the other hand, Atharva is getting ready for his meeting while Imlie feeds him sweetened curd as good luck.

Further, Imlie tells Atharva to not leave without having breakfast.

Later, Cheeni requests Imlie to make Aloo Parantha for her but Imlie says that she is making Daliya since it is healthy for her.

Feeling infuriated, Cheeni sees a bottle of something and adds it to the Daliya.

When having breakfast, Cheeni makes a face as she says that the Daliya is not right.

However, Atharva says that Imlie cannot be wrong and eats the Daliya to prove Imlie's innocence.

Atharva coughs and says that it is because of the Daliya being hot while he goes upstairs making up an excuse.

Imlie goes after him while Cheeni wonders how nothing happened since she mixed something in the Daliya herself.

In the room, Imlie gets shocked to see Atharva sick and apologizes to him realizing that the Daliya was indeed bad.

She calls the doctor immediately and the doctor suggests she have Atharva consume ginger while he sends the medicines home.

Imlie goes downstairs and steals the last piece of ginger from the kitchen while Devika is busy talking with the servant.

Imlie feeds the ginger to Atharva who tells her that someone had definitely tempered with Cheeni's breakfast.

Atharva also recalls to Imlie how someone had messed with his equipment when he competed a few years ago.

Imlie tells him that she is doubtful since that competition and this is a house, but she will investigate to make sure it was not a trap.

Further, Atharva holds Imlie's hand and looks at the clock realizing he is late for the meeting.

© Copyright tellybest.com, 2022, 2023. All Rights Reserved. Unauthorized use and/or duplication of any material from tellybest.com without written permission is strictly prohibited.
Cached Saved on: Monday 21st of November 2022 01:31:27 AMCached Disp on: Thursday 1st of December 2022 01:00:31 PM