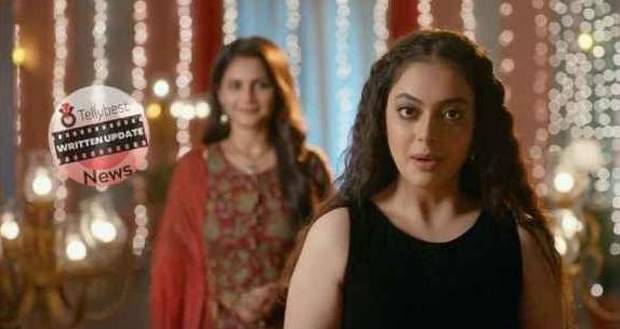 Just then, Anu takes Cheeni aside and scolds her for saving Imlie as they could have postponed the wedding if she was injured.

Later, Atharva enters and sees Cheeni with a loving gaze but Imlie comes in between them.

Imlie gets happy seeing Atharva while he wants to confront Cheeni about not telling the truth to everyone.

Meanwhile, the Rana family enters and greets the Rathore family.

Kia and Akash plan to fool Atharva by supporting him while Cheeni hears their talk and gets angry.

She thinks Anu’s words were right and decides to snatch Atharva by hook or crook.

Later, the mehndi function starts and both Atharva and Imlie sit on a sofa.

In the kitchen, Cheeni gets an idea after seeing the spinach leaves.

On the other hand, Imlie asks for Rana’s permission to dance before mehndi and offers her hand to Atharva.

When he did not put his hand on her hand his siblings start to tease them saying “ Imlie Bhabhi Attu Ki Deewani”.

Before Atharva and Imlie start dancing Imlie inquires about Cheeni but Rupi tells her to do a couple dance first then she can do a group dance with Cheeni.

Later, Imlie and Atharva start to move lovingly and get lost in each other's smooth bodies while the song “Aadha Ishq” plays in the background.

Sundar breaks Imlie's dream and the family starts to dance while Rudra is worried about Atharva breaking Imlie’s heart.

In the kitchen, Cheeni grinds the spinach and Sundar enters telling her to come.

Later, Meethi recalls Imlie (Her Daughter) and tells her to bless her Gudiya (Imlie’s Daughter) while sitting with Saiya Maiya.

At the same time, Cheeni puts a bowl of spinach paste beside the real mehndi bowl.

She apologizes to Imlie in her mind as she deserves to become Arto's 5-star homeowner.

Cheeni picks up the mehndi bowl and gets shocked when Atharva is watching her.

However, Cheeni gives him a small smile and goes with the real mehndi bowl.

Meanwhile, Atharva pulls Cheeni into a corner and traps her body against the wall.

He asks Cheeni why she did that and Cheeni gets scared thinking he saw her changing the bowls.

Atharva and Cheeni look into each other's eyes lovingly and Cheeni teases him about the possibility of getting caught by Rudra.

However, he keeps holding her and looking into her sparkly eyes expressing his fearless love for her.

On the other hand, when Ginni (Atharva's Sister) is about to put a mehndi dot on Imlie’s hand she smells the bowl and stops her.

© Copyright tellybest.com, 2022, 2023. All Rights Reserved. Unauthorized use and/or duplication of any material from tellybest.com without written permission is strictly prohibited.
Cached Saved on: Monday 21st of November 2022 05:23:39 PMCached Disp on: Wednesday 7th of December 2022 02:50:20 PM