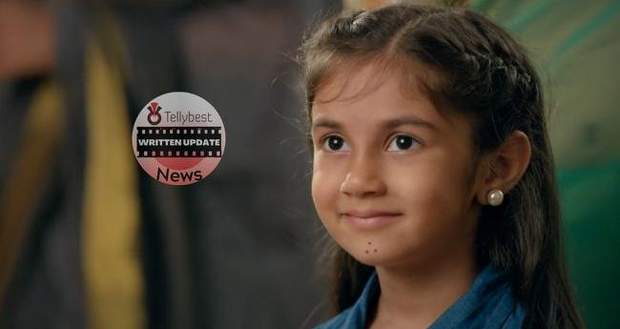 Today's Imlie 19th September 2022 episode starts with 7-year-old Imlie going from Pagdandiya to Rathore's house. Arpita and Sundar welcome her but Narmada glares at her.

After 8 years, Imlie’s voice introduces her daughter Imlie and her difficult life and advises her to fight every adverse problem in her life.

Meanwhile, Imlie is sitting in a pickup truck filled with vegetables and the truck stops suddenly and jute bags fall on her.

The driver informs Imlie about a traffic jam and Imlie walks towards the commotion and sees a concert happening.

Meanwhile, a man is playing beats and his fans enjoy holding banners of “I Love Atharva”.

Imlie screams at him to stop the music but due to the loud noise, no one hears anything.

Furious, Imlie complains to nearby standing policemen and they arrest Atharva.

However, Imlie’s dupatta covers his face when the police are taking him away.

Atharva tries to see Imlie’s face but the crowd surrounds him.

Later, Pandit Ji throws Imlie and a bunch of children out of the temple as he is waiting for the rich trustees to inaugurate the temple.

After some time, a car enters the premise and Imlie comes out with the same children dressed stylishly.

Meanwhile, Arpita reaches the temple and tells Pandit Ji that Imlie is the trustee of the temple.

However, shocked Pandit Ji apologises to Imlie and Arpita tells her to inaugurate the temple but Imlie asks for Cheeni.

On the other hand, Cheeni gets ready in Imlie’s clothes and Rubi (Cheeni's Aunt) confronts her for taking advantage of Imlie’s love for her.

However, Cheeni exclaims that Imlie gets everything because she is AryLie’s real daughter and she needs to prove her worth because she is Malini’s daughter.

In the temple, Cheeni, Sundar and Rubi reach the temple and Sundar give Imlie her birthday gift.

Meanwhile, Cheeni acts as a loving sister to Imlie and thinks of a way to go to the Atharva concert.

However, Narmada blames Imlie for Aryan and Imlie’s death and goes inside the temple.

Seeing Narmada go, Imlie’s heart breaks as no child wants to be the reason for their parent's death.