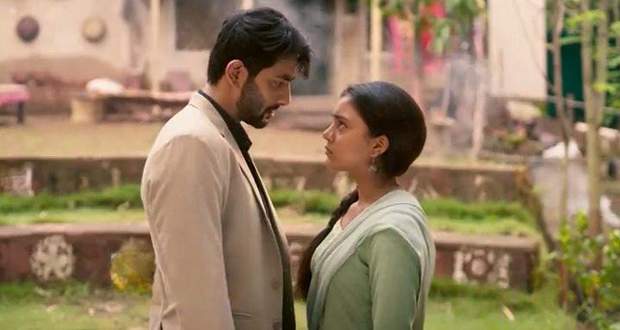 Today's Imlie 1st August 2022 episode starts with Chini meeting Aryan who is eating in the market and sees him eating.

He asks her if she has gotten a hold of the reporter and Chini tries to drag him saying that the reporter is waiting at home.

He gets confused as Cheeni reveals to him that Imlie has taught her everything and keeps praising her.

Aryan asks Chini if the reporter is her mother but Chini just shakes her head sideways.

Further, he tells her to wait while he pays the bill.

Meanwhile, Imlie sees the toy shops at the fair and thinks to buy the toy mic that Chini wanted but scours the house and learns that she doesn't have money that is enough for even food.

Back in Delhi, Malini informs Anu that she will get rid of the girl because of whom Aryan is in Pagdandiya and calls an intern named Rajat who lives nearby Pagdandiya, and tells him to get rid of Chini.

At the same time in Pagdandiya, Imlie calls Kamal for her salary but he informs her that he will give her the salary only after she resolves the issue with Bhaskar Times.

Imlie wallows in her sorrow of not being able to provide even a simple gift for Chini while Meethi comes there and gives her money to buy the toy.

Elsewhere, Cheeni sees a toy shop and goes to it while a village lady and the shopkeeper show partiality due to her not having a father.

The shopkeeper insults Cheeni and pushes her while Aryan arrives at the right time and saves Imlie.

Imlie realizes that Meethi has given her savings and scolds her but ends up comforting Imlie instead.

Back at the shop, Aryan scolds the villages and rebukes the shopper for believing in Sita Maiyaa but still discriminating against people after which he buys the whole shop from him.

However, as he turns to look at Chini, he sees that she's gone and feels guilty for not paying attention to the route of her house.

© Copyright tellybest.com, 2020, 2021. All Rights Reserved. Unauthorized use and/or duplication of any material from tellybest.com without written permission is strictly prohibited.
Cached Saved on: Friday 30th of September 2022 05:32:54 PMCached Disp on: Saturday 1st of October 2022 12:39:36 AM