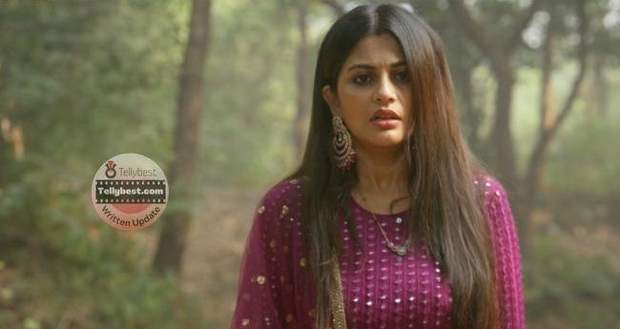 Meanwhile, the head of the goon shoots and blasts the tire, resulting in her stopping the truck.

The goons gather all of them and say that Atharva and Imlie resemble the famous Laila and Majnu.

He further tells that Majnu was beaten brutally in front of Laila and this Majnu will get beaten up as well.

Atharva tells the goons to shut up and along with him, even the children make fun of the goons.

One by one all the goons attack Atharva and he fights them ferociously.

However, the goon's boss hits Atharva on the back of his while Imlie stands there and watches helplessly.

Atharva is attacked twice on his head and he stumbles but Imlie rushes to hold him and saves him from falling.

Meanwhile, Rudra’s men inform him that Atharva and Imlie have been captured by goons.

On hearing Rudra talk about Atharva and Imlie being captured, Akash calls the police commissioner right away.

On the other hand, Imlie is held at gunpoint and the goons decide to have some fun of their own so they tie Atharva to a rope while connecting it to the back of the truck.

The boss then points his gun at Imlie and the goons threaten the children with a knife.

At the hospital, Chini calls Anu while Anu informs Chini that Imlie cut her call.

Chini gets appalled after hearing this and says that Imlie used to have trouble cutting apples and bananas and now she is cutting people’s calls.

Chini further tells her that she is different and will make sure Atharva and Imlie break their marriage.

The nurse takes her phone back and tells Chini to take her medicines now.

Chini agrees and switches the TV on where the news is being shown about Imlie and Atharva being captured by the goons.

Cheeni gets frustrated and mumbles that they should rescue her instead of those children.

However, the doctor hears Cheeni and clears that they are trying to help her and orders her to take the medicines.

Chini puts the medicine in the glass and throws it at the doctor’s face.

Meanwhile, the goon gets distracted and Imlie seizes this opportunity to throw a knife in Atharva’s direction which he catches perfectly.

Imlie gets happy with her efforts while the goon notices it and gets angry.

At the Rathore residence, Arpita breaks down while Sundar tries to comforts her.

Just then, Anu enters the house and states that they all worried only for Imlie and do not care about Cheeni as if only Imlie is their child.

She says that Imlie is the reason for Chini being trapped in that help center and now she’s facing karma.

She further says that Chini will live in Rana’s house permanently so she will not come to Rathore's residence anymore.